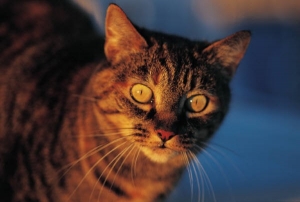 August 20, 2014 (San Diego’s East County)—U.S. Fish & Wildlife Service officials have warned California this month that solar-tower technology used at Ivanpah and proposed by BrightSource near Joshua Tree National Park on the California-Arizona border have the “highest lethality potential” of all desert solar technologies.  The warning comes after Ivanpah, the first facility to use the concentrated solar technology, was found to be burning birds alive, Associated Press reports.

The proposed site is on a flight path for birds migrating from the Colorado River to the Salton Sea and is richer in bird life than Ivanpah—including protected peregrine falcons and Golden Eagles.  Wildlife experts have also raised concern that the vast sea of shimmering solar panels is actually attracting waterfowl. In addition, some officials have called these solar fields “mega traps” for birds because the power towers attract insects on which some birds feed.

However stray cats customarily stalk small birds—not eagles, falcons, or waterfowl such as ducks, geese and pelicans.  Moreover, Kevin Emmerich at Basin and Range Watch, an environmental advocacy group, observes wryly, “You never see herds of feral cats in the desert.  Anytime someone’s cat spends the night outside, the coyotes get fed well. So cats are not killing birds anywhere close to the power towers.”

Incineration of birds in flight is so common over the Ivanpah facility that workers have dubbed the tormented birds “streamers” as they fall from the sky in flames, dead or dying a tortuous death.

Federal wildlife authorities want bird deaths to be tracked for a year to assess the toll during the migration season at Ivanpah, while research continues on options.  But for now, biologists say there is no known way to save birds from the lethal concentrated solar flux technology – except to not build the projects and to decommission the one recently opened.

Crazy in-and-of-itself, this case also dramatically highlights--as hiker gal states above--the inherent insanity of the whole legal concept of "mitigation": i.e., the notion that one can legitimately compensate for the destruction of one unique, pristine environment by "buying" a few units of preservation elsewhere. Imagine if this practice were adopted in the arts. It would be as if someone could, in order to make-way for a new condo complex, tear down the Sistine Chapel, and then compensate for it by donating a few million to a van Gogh museum in Amsterdam. Say what?! This is nothing more than than a secular version of the Medieval sale of indulgences for twenty-first century developers. It must stop.
Is this how we should treat our wildlife? Mitigation like what's being proposed is an insult to the public. It doesn't alleviate the problem onsite and is more than ridiculous - it would be laughable if not so serious. They know the public wasn't born yesterday, but treat us that way by proposing stupid solutions like this to try to salvage a project that should have never been approved in the first place. They not only need to shut it down, but showcase it as an example of why not to ever build anymore anywhere. We can do better than this, but until the system quits giving free passes to "intentional blindness" by developers on the innate features of their projects that kill wildlife by the thousands, nothing will change and the cumulative effects will be devastating.