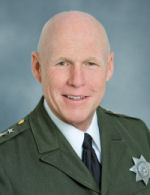 November 18, 2011 (Lakeside) --After 31 years of service to San Diego County, Undersheriff Jim Cooke is calling it a career. His  last day on the job is Friday, December 2. Assistant Sheriff Ed Prendergast is taking his place.

Cooke’s career including service in many high-profile East County incidents ranging from the Santana and Granite Hills high school shootings to the Cedar Fire.
Undersheriff Cooke plans to spend more time with his wife Joyce, two adult daughters and four
grandchildren. Reflecting on his time with the department, Mr. Cooke says he truly enjoyed his job.
“I have had the remarkable good fortune of working a wide variety of interesting and exciting assignments at every possible level in the organization, while serving the community I love,” he said. “And best of all, I got to do it with the finest people in the business. I'm very proud to be a deputy sheriff and am grateful for the opportunities this career has brought my way.”
Sheriff Bill Gore says Undersheriff Cooke will be greatly missed. “Over my law enforcement career I have worked with many excellent men and women, individuals who are knowledgeable, ethical and extremely dedicated. But I can honestly say I’ve worked with none better than Undersheriff Jim Cooke….He is an exceptional leader and an exceptional man.”
Undersheriff Cooke began his career with the department as a Deputy Sheriff in 1980. He moved up through the department, occupying the ranks of Sergeant, Lieutenant, Captain and Commander. In 2006, he was appointed Assistant Sheriff of the Court Services Bureau. In 2008, he was assigned to oversee  the Law Enforcement Services Bureau, and in 2009, was appointed Undersheriff to Sheriff Bill Gore. In this capacity, he oversees the day‐to‐day operations of the San Diego County Sheriff’s Department. In 1989, he was assigned to the Public Affairs Division where he served as a spokesman for Sheriff John Duffy, media and international liaison.
Undersheriff Cooke supervised a team of investigators at the multi‐jurisdictional Metropolitan Homicide Task Force in 1991. The Task Force investigated and made arrests in the murders of prostitutes and transients whose bodies were found in East County. He was among the detectives at the Sheriff’s Homicide Detail who investigated high profile cases such as the murder‐suicide of Ian Spiro in Rancho Santa Fe and the murder of Vickie Eddington in Jamul.
In 2000, he was transferred to the Special Enforcement Detail where he served as the commanding officer of the department’s full‐time SWAT Team, Canine Unit, Bomb‐Arson Unit, and Crisis Negotiation Team.
The team saw a lot of action with the Santana High School shooting in Santee, Granite Hills High School shooting in El Cajon and Congregational Tower shooting in Chula Vista.
Undersheriff Cooke also served as Incident Commander in Lakeside during the devastating 2003 Cedar Fire.