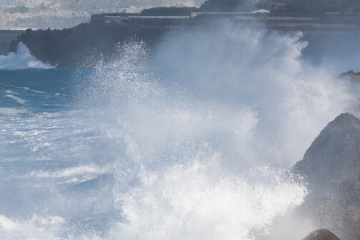 No, we’re not talking about houses that lost value compared to the mortgage totals. Zillows’ report looked at the impacts of climate change on housing.

Zillow concludes that almost 300 U.S. cities will lose over half of their homes if sea levels rise six feet, and 36 U.S. cities would be completely underwater—literally--by the year 2100, if climate scientists’ predictions are accurate.

Those homes are valued at hundreds of billions of dollars, all likely to be lost a century from now.

The hardest hit would be Florida, where one in eight homes could be submerged, followed by Hawaii, which could lose one in 10 homes.  The cities of Miami, Honolulu, Boston and New York would all have huge losses.

California stands to lose over 42,000 properties to rising sea levels, a value of over $49 billion.  But that’s less than a half a percent of the state’s total housing stock.

Here in San Diego, 2,289 homes worth $2.8 billion would be underwater according to Zillow’s report and map –or 0.7% of all San Diego housing.  Waterfront lots in Mission Beach would be essentially wiped out, along with some portions of Pacific Beach and Point Loma.

Zillow concludes, “It is clear the threats posed by climate change and rising sea levels have the potential to destroy housing values on an enormous scale.”

"Sea levels could rise nearly twice as much [six feet] as previously predicted by the end of this century if carbon dioxide emissions continue unabated, an outcome that could devastate coastal communities around the globe, according to new research published Wednesday. The main reason? Antarctica." . . .Actually, according to NASA sea ice surrounding Antarctica reached a new record high extent in 2014, covering more of the southern oceans than it has since scientists began a long-term satellite record to map sea ice extent in the late 1970s.

"potential" "if" . If Hell freezes over we all get to go to Heaven.