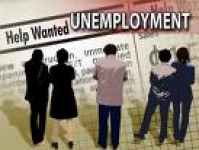 December 28, 2013 (San Diego’s East County) -- Long-term unemployment benefits expired on Saturday , after Congress failed to authorize an extension. People who have been out of work for six months or longer will no longer be receiving unemployment checks.

About 1.3 million Americans will lose benefits immediately, including 222,000 Californians.  By the end of 2014, it’s estimated that nearly 5 million people will lose unemployment benefits. Those checks range from $40 to $450 a week, so this is a major blow for individuals who may have no other source of income.

The New York Times reports that removing this safety net for unemployed workers will push hundreds of thousands of households below the poverty line. With the cut off, only one out of every four unemployed Americans will receive jobless benefits –the lowest proportion in half a century.

Though the rate of joblessness has fallen to about 7%,  U.S. Secretary of Labor Thomas Perez says  it’s taking longer for people to find jobs today than in the past.  Back when unemployment extensions were first approved while George W. Bush was president, it took an average of 17 weeks for an unemployed person to find a job. Today, it takes 36 weeks – over twice as long.

California has offered 63 weeks of unemployment benefits during the recession. But now, all states will drop to a maximum of just 26 weeks of benefits for all unemployed people.

Democrats have sought a temporary extension of benefits for the long-term unemployed, but Republicans in the House have refused to extend the benefits.

Supporters also  argue that long-term unemployment benefits provide a vital safety net for families and individuals in need and also  spur the economy, since recipients spend the money on goods and services, while cutting off unemployment would slow economic recovery.

In San Diego, there were nearly 110,000 unemployed people in November, the most recent month for which data is available. That’s down from 133, 200 a year ago.  But in portions of East County, the rate is much higher – and among Iraqi Chaldean immigrants in El Cajon, the unemployment rate remains above 60 percent.

Coming on the heels of cuts in the food stamp program known as SNAP, or Supplemental Nutritional Assistance Program, the complete cut-off of unemployment funds for people who have been out of work longer than six months is an even harder blow.

These cuts are also likely to lead to a rise in homelessness—a troubling prospect.

A new survey by the U.S. Conference of Mayors found deep concern about hunger and homelessness among the mayors surveyed.   In cities surveyed,  20 percent of people who needed food assistance in the past year did not receive it-- and over three-fourths of cities  had to cut  the amount of food available for the hungry due to lack of resources.  One in every five homeless people who needed assistance didn’t receive it last year, either, – and lack of beds caused emergency shelters in 71 percent of the cities surveyed to turn away homeless families with children.

Eliminating unemployment benefits for millions of out of work Americans is expected to increase hunger, homelessness, and hopelessness among our nation’s poor.