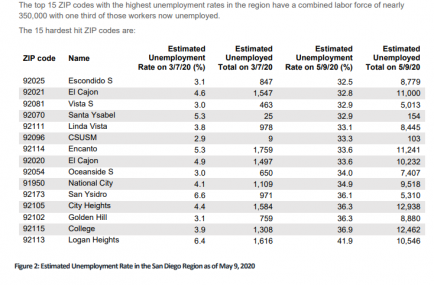 A zip code breakdown reveals that the worst unemployment rates as of May 7 are in our inland region including East County and southeast San Diego neighborhoods. The highest rates are in Logan Heights (41.9%) and College area (36.9%). Among East County cities, two El Cajon zip codes had 33.6% and 32.9% respectively. The Santa Ysabel community had 32.9% and Escondido 32.5%. Inner city east San Diego neighborhoods including Encanto (33.6%) and City Heights (36.3%) also had very high rates, as well as some South Bay and North County communities.  All of the areas had low single-digit unemployment rates before the pandemic.

The survey reflects data through May 9, before some restaurants and retailers began reopening in recent days. During the ninth week of lockdown due to coronavirus, unemployment rates continued to rise with 22,800 jobs lost between May 2 and May 9 alone.

As of May 21, when SANDAG last updated its analysis, SANDAG reported new job formation remained slow, with “businesses making tough decisions including claiming bankruptcy or choosing not to reopen after stay-at-home orders are lifted.”  SANDAG indicated for the local economy to significantly improve will require completion of phase 2 and the beginning of phase 3 portions of the Governor’s roadmap to recovery.

Starting this past Friday, some restaurants have reopened for dine-in services and some retailers are open for in-store customers.  Some of these businesses are now hiring again, though it remains to be seen to what degree customers will return, with some ready to venture out but others opting to stay home longer to avoid potential exposure to the virus. 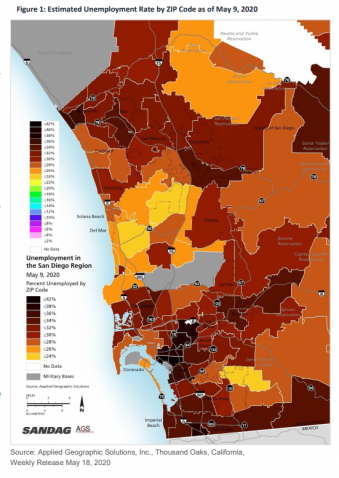 Even if customers fill every table, however, restaurants face daunting challenges due to social distancing requirements with some losing half to two-thirds of seating. Continuing takeout or delivery options may help cushion some of that loss.

Phase three businesses are not yet open, but that the county hopes the Governor will allow them to open soon, including gyms, hair salons and more.  A cautionary note on moving too fast, however, may be found in Missouri, where one hairdresser working despite having symptoms in a reopened salon exposed 91 customers to COVID-19, CBS News reported.
Phase four businesses that draw large crowds could remain shuttered until sometime next year, such as concert halls and sporting events with spectators.
In addition, loss of conventions and tourists shying away from traveling on airlines and cruise ships can be expected to continue to depress San Diego's visitor-based economy for many months to come.

I fear that people will resort to violence to get food and water.