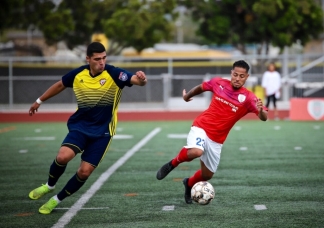 May 15, 2019 (San Diego) - With a rose ceremony to start the match, the ASC San Diego players presented their mothers with beautiful red roses in front of a packed home crowd at Mission Bay Stadium this Sunday. It was a sentimental start to what would be a difficult loss for the home team when they were unable to secure three valuable points in their Southwestern Conference bid for the postseason.

In one of the biggest matches of the season, ASC San Diego saw their four win streak come to an end this past Sunday as they fell to FC Arizona on their home pitch. ASC gave it their all as they took on a very strong Arizona team. Despite their efforts, an early first half brace was enough for the visitors to take all three points in this highly contested match.

The first minutes of the match saw FC Arizona able to make a run in on goal only to be thwarted by the quick-footed keeper Jean Antoine. Soon after, a scramble at the top of the box allowed FC Arizona striker Cesar Mexila Castillas to shift the ball to his right and unleash a quick strike at the near post. The awkward movement on the ball was enough to beat Antoine as it sailed just over the reach of the keeper in the 5th minute. The striker found himself on the scoresheet for a second time in the 23rd minute after pulling the trigger inside the box, giving the keeper no chance.
ASC San Diego managed to find some rhythm of their own, seeing several great chances to mount a comeback. Including a Christian Enriquez strike who received a touchback pass from returning midfielder Sean Callahan. His strike from twenty yards out forced the Arizona goalkeeper to make a tough save.
The men in red came close with a few other opportunities including a well taken corner kick from winger Dallin Cutler that just missed the waiting head of team captain Kuba Waligorski. The rest of the half saw ASC Keeper Jean Antoine making a few more heroic stops including a couple of De Gea-esque kick saves to keep the match alive for San Diego’s team.
Second Half Stalemate
With both teams understanding what the outcome of this match could mean for their placement in the NPSL Southwestern Conference standings, the second half brought an increased intensity to the game.
There was also an increased sense of urgency from the home side as ASC saw a bit more possession after the break. With over 600 passes completed, ASC began to outplay Arizona in the midfield. Arizona’s frustrations were evident in the second half after giving up several devious fouls to break in their efforts to break ASC San Diego’s newfound rhythm.
Despite their dominant performance in the second half, ASC was unable to take advantage of several great opportunities to pull one back. With a couple substitutions the home squad was hoping some fresh legs would do the trick; however, this was not to be. With the full time score of 0-2, ASC San Diego headed off the pitch knowing they are down today but not at all out of position for postseason play as look forward to their next opportunity to climb the table.
Next Matches
San Diego’s team will be on the road next week to meet Riverside Coras at the J.W.  Stadium in Riverside, CA this Sunday on May 19th. The following week ASC will be back home at Mission Bay Stadium on Saturday, May 25th versus AS Los Angeles starting at 7 p.m.

Be sure to get to the stadium early for a soccer double header as ASC San Diego Women play prior to the men at 4 p.m. against the San Diego Sea Lions in their third ever WPSL match.