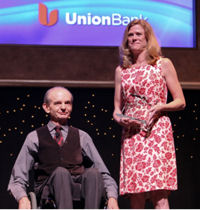 February 8, 2012 (San Diego) -- – As part of its ongoing commitment to cultural diversity and responsible banking, Union Bank, N.A., has  partnered with KPBS to honor 17 local individuals who are making a difference to enrich the lives of others.  The honorees were announced as part of the 2011 Cultural Diversity Partnership, which recognizes and pays tribute to local heroes from eight diverse communities who are making a difference by improving their workplace, profession, neighborhood, community, region and the world.  The year-long celebration of diversity culminates with an awards ceremony on February 8, 2012, where recipients will be formally recognized. The awards event will broadcast on KPBS-TV on April 5, 2012, at 10:30 p.m.

Bill Bodry, founder and president of the Challenge Center, was recognized at the Union Bank and KPBS 2011 Local Heroes Awards at the Balboa Theatre on February 8, 2012. Mr. Bodry poses with Tiffany Picquilloud who nominated him for the award. Mr. Bodry and 16 other honorees were nominated for making a difference in the lives of others.
Photo by Melissa Jacobs

“We are thrilled to partner with KPBS to celebrate these amazing community leaders,” said Union Bank Senior Executive Vice President Pierre Habis, head of Community Banking at Union Bank. “The Local Heroes program helps to highlight their extraordinary accomplishments and the diversity of San Diego, and we are excited and honored to be a part of this community celebration.”
“KPBS has the pleasure of partnering with Union Bank to celebrate these outstanding local heroes,” said KPBS General Manager Tom Karlo. “KPBS is proud to feature these honorees in our programming. Their stories truly inspire others in our community  and make a positive difference in our neighborhoods and the world.”
The 2011 Local Heroes honorees are:
Black History Month
Veverly E. Anderson is devoted to bettering the lives and circumstances of underprivileged youth in the impoverished neighborhoods of southeast San Diego. Ms. Anderson is currently the community coordinator and youth program coordinator for the San Diego Community Housing Corporation and the Town & Country Village Learning Center, respectively. She has also made it her life’s mission to create opportunities that address the social and economic needs of children, their families, and their communities. After 14 years with the military, Ms. Anderson also worked as an outreach specialist for the Black Infant Health Program/San Diego State University Foundation and as a parent educator for the SAY San Diego Early Literacy Project.
Theophilus A. (Theo) Logan has devoted his life to helping others. After serving in the United States Army for 20 years, Mr. Logan turned to his passion for real estate, helping buyers achieve what may sometimes seem an impossible dream of owning a home. Mr. Logan established Logan Real Estate in 1962, and in 1978, became the first African American president of the San Diego Board of Realtors. When he retired, his office became a landmark in the southeast community, where residents could seek advice and guidance regarding buying, selling, and investing in real estate.

Martha R. Logan was taught to focus on the needs of others by her mother and grandmother after the death of her father when she was a baby. Ms. Logan recognized a great need for legal counseling in her San Diego community, earned her Juris Doctor degree, and in 1976, began practicing law with an emphasis on protecting senior citizens and their assets, through estate planning and personal counseling. Ms. Logan is also a 60-year member of Alpha Kappa Alpha Sorority, Inc., and has been an integral part of its local service programs for more than 30 years.