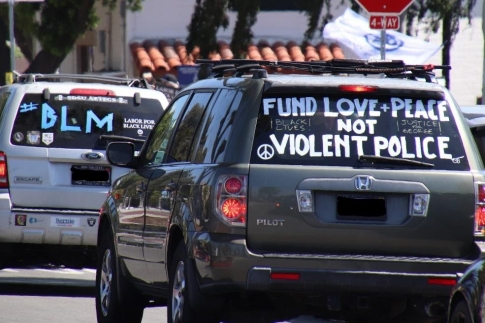 Story, photos and videos by Henri Migala
June 20, 2020 (La Mesa) -- La Mesa was once again the location of demonstration in support for Black Lives Matter.  This time the event was sponsored by many Labor Unions, which make up the San Diego Imperial County Labor Council, and was promoted as the Labor for Black Lives Caravan. It was held on June 19th, a date  known as Juneteenth which commemorates the end of slavery in the U.S.
Today’s caravan of over 100 vehicles met at the County Administration Building at the Embarcadero in San Diego.  From there, motorists drove north to W. Washington Str, then onto W. University Ave until they arrived at the La Mesa Police Department.  No police officers, on foot or in cruisers, or even police vehicles, were visible. 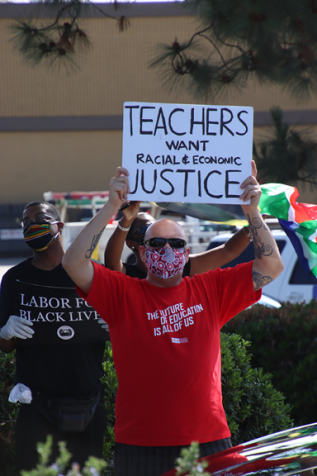 The cars were honking and displaying their Union support for Black Lives Matter as they drove.  Numerous other cars not in the caravan honked in support of the demonstration.  The caravan turned off University Ave onto Allison Ave., then on Date Ave., where drivers entered the La Mesa Police Department parking lot, circled around, and exited back onto Date Ave.
Demonstrators then started gathering at the intersection of Allison Ave and Date Ave.
“I’m here because we’re disturbed by the hundreds of years of exploitation and degradation of our brothers and sisters of the African American community,” said Dr. Gregg Robinson, a Professor of Sociology at Grossmont College.  “This has to stop!”
Asked who was participating in the rally, Dr. Robinson replied “dozens of unions, Teamsters, teachers, Social Workers, bus drivers, school employees, building trades, carpenters.  All of them have that kind of good spirit.” 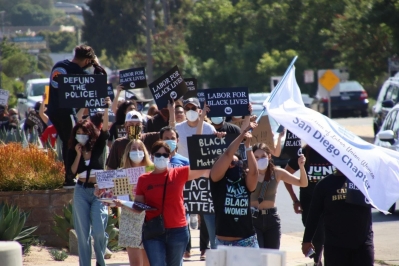 From there, the approximately 125 demonstrators walked up Allison Ave. and turned onto Spring Street.  Because there was no sidewalk, the demonstrators walked on the right lane of Spring Street until they took a right on La Mesa Blvd.  From there, they stayed on the sidewalk and walked up to University Ave and then back to the intersection of Allison and Date Ave.
The majority of the demonstrators then went home, although many stayed and continued their peaceful demonstration at the intersection without incident, in the third major protest targeting La  Mesa police.
An initial rally protesting the killing of George Floyd was held on Saturday, May 30.  That rally ended in a confrontation between the police at the station and the demonstrators, with rocks and Molotov cocktails thrown at police, their station and an armored vehicle. A police helicopter announced that the May 30 event was declared unlawful and asked the demonstrators to disband.  Shortly before nightfall, the La Mesa police forcefully disbanded that event with pepper balls, tear gas and beanbags.  Multiple businesses in La Mesa were later looted and burned, but it is uncertain if the demonstrators were involved or if outside provocateurs were primarily responsible. 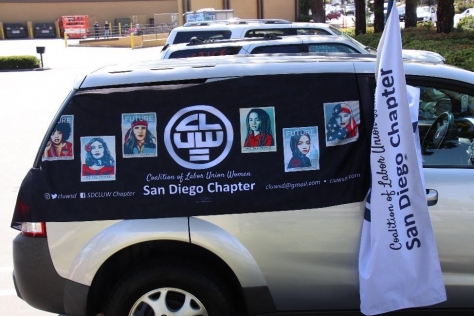 On Sunday, June 14, another demonstration was held at the La Mesa Police Department.  Promoted as a Unity Ride and Unity Rally, over 115 motorcycles from nearly fifteen motorcycle clubs roared into the La Mesa Police Department parking lot. This time, the demonstrators were met by La Mesa Chief of Police Walt Vasquez, who greeted members of the public and the motorcycle clubs outside the station.  That event went on peacefully, with multiple speakers addressing the demonstrators.
Video of cars arriving in La Mesa:

Video of American Federation of Teachers (AFT) explaining the reason and purpose of the rally: