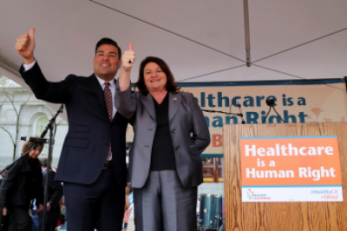 June 4, 2017 Sacramento) – Both houses of California’s Legislature have passed a landmark bill  called the “Healthy California Act”  to create a single-payer, universal healthcare system and eliminate private insurance companies  from covering anything covered by the state plan, which is broad.

If enacted  the measure coauthored by Toni Atkins (D-San Diego) and Senator Ricardo Lara (D-Bell Gardens) would  cover all Californians, with no premiums, copays or deductibles, for all medical, dental, vision care, mental health and chiropractic services.

But Senate bill 352 must go back to the Assembly to remedy a major flaw: the bill was advanced without details on how to pay for it, in order to meet legislative deadlines, and contains a clause that without the Secretary of Health and Human Services determining that a new Healthy California Trust Fund has sufficient revenues to fund the bill’s costs,  it will not become law.

The bill, if approved by the Assembly with a funding plan, would also still require a signature by Governor Brown, who has voiced skeptism  and could opt to veto the measure.

The costs are formidable.  A Senate committee analysis found providing healthcare for all Californians could cost more than the entire state budget’s  spending in 2016, or over $400 billion. (Find links on this page to all legislative reports.)

Another report by the University of Massachusetts Amherts, commissioned by the California Nurses Association, however, found that the bill would cost $331 billion a year to run – but would actually reduce overall healthcare spending in California by 18 percent.  The present cost of healthcare in California is about $404 billion under today’s system, the report found.

“We don’t have the money to pay for it,” Republican legislator Tom Berryhill has stated.

Advocates have thoughts on how to raise it, and a substantial portion could come from money already being spent on healthcare by the state and federal governments, though a hefty gap remains to be filled, most likely, by raising taxes—though whether that would be offset in savings on eliminating health insurance premiums, copays and deductibles will vary from person to person.

The estimates make assumptions that may or may not prove to be reality.   For instance, California would have to get a waiver from the federal government,  a huge “if” under the Trump administration.

Of the $331 billion needed to run the system (if the nurses’ estimate is correct), $225 billion would come from existing federal and state sources – including funds already being expended on Medicare and MediCal.   The state’s savings would kick in by reducing administrative costs on health care billing and executive salaries, as well as negotiating with pharmaceutical companies to lower prescription drug costs.  The state could also potentially revise reimbursements to medical providers, which could pose problems since many providers are already balking at reduced rates.

Even if the $225 billion is available from federal and state funds, that still leaves a gap of at least $106.9 billion to fill and possibly more, if previously uninsured or under-insured people seek out more medical services.

Of that $106.9 billion, the nurses group proposes that $92.6 billion come from businesses, many of whom are already paying to buy health insurance for workers and would no longer have that expense, thus could afford to pay their share for universal healthcare coverage, or so the argument goes.  The remaining $14.3 billion would come from increasing sales taxes by 2.3% on everyone else – though certain necessity items such as groceries, utility payments and rent would be exempted. There would also be help for low-income Californians.

It has drawn support in concept, pending funding details, from a broad range of consumer and health organizations, labor unions, minority groups, and advocates for veterans, seniors and the disabled.

So if the plan became law, would you ultimately be paying more or less than now?

That depends on a variety of factors, such as how much money  you spend and pay sales taxes on, what your current healthcare premiums are,  what items are ultimately taxed, and more.

Many people paying hundreds of dollars each month for healthcare premiums likely pay far less than that for sales tax on items that they buy. Add in savings for not having to pay copays or deductibles on medical services, hospitalizations, ambulances, or prescription medications and the savings could be substantial.

However if your current premium is paid for mostly by your employer,  and if you have substantial taxable purchases such as buy a vehicle or costly vacation,  you may wind up paying more than at present, at least in some years.

The plan is also most apt to benefit California residents more as they become older and the cost of healthcare under an insurance company model becomes more and more costly.   The bill would cover all California residents, including citizens and non-citizens, even undocumented  but would allow insurance to remain  in place for persons still establishing residency until they became eligible for the state-run plan. It would also cover evryone with pre-existing conditions.

Consumers and doctors’ offices would also save time by no longer having to get pre-approval from, or deal with in any way, insurance companies that often have long delays for callers or deny care.  The new system aims to put decisions back in the hands of doctors, not insurance companies. But what happens if problems  or delays arise under the new system remains to be seen.

The system would be a single-payer system similar to Canada and Britain’s systems, where the government replaces private insurance companies, paying doctors and hospitals directly for their healthcare services. This is also similar to the Medicare for All model proposed by Senator Bernie Sanders during his presidential campaign.  It’s different than a public option, where the government would merely offer an alternative to insurance plans still available.

Future of the measure tied to Washington D.C. politics -- and Governor Jerry Brown

Though passed by both houses  with a gap to be filled for funding requirements,  the measure now goes back to the Assembly for reconciliation – in this case, putting in a detailed funding proposal which will require a new vote.  If both houses agree it will then go to Governor Jerry Brown.

Much may hinge on what happens in Washington D.C.  The Republican-controlled House of Representatives has passed a plan that repeals the Affordable Healthcare Act (Obamacare) and according to the Congressional Budget Office would throw 23 million Americans off healthcare coverage completely, leaving many more with pre-existing conditions and seniors to pay much higher rates to keep coverage, though young and healthy people would likely pay less and wealthier Americans would get tax cuts  Subsidies for low income Americans would also be targeted.

Fear of such losses in coverage or even higher rates for those who can least afford it have pushed California Democrats to move forward hastily toward universal healthcare in an effort to protect many Californians from losing coverage or facing even more unaffordable care.

The federal bill  passed by the House s now before the U.S. Senate, which has indicated it will be making significant changes if it passes the measure at all, in which case it would go to President Donald Trump to sign.  Whether the Senate will pass anything or not, and if so, what it will include, is a giant unknown at this point.

Governor Jerry Brown, earlier this year in a talk with reporters, voiced major skepticism over whether it’s possible to fund a universal healthcare system in California to improve health for residents without jeopardizing the state’s financial wellbeing.   “How do you do that?” he asked.  “You take a problem and say `I’m going to solve it by something that’s even a bigger problem, which makes no sense.”  Brown said at the time that the first priority should be to stop the Republican healthcare bill in Congress from becoming law. “That story will be known in a few weeks; we’ll go from there,” he added, leaving the door open to consider a universal healthcare plan for California, but in language that’s far from reassuring for the California bill’s backers.

Atkins and Lara, the measure’s co-authors, adamantly defend the need for their measure.

“More and more Californians believe healthcare is a basic human right,” Atkins says,  adding that she has personally experienced being poor and worrying about not having access to healthcare when she was young, and has heard from many constituents who fear losing healthcare with repeal of the Affordable Care Act.  But she acknowledges, “Let’s be clear—there is a lot of hard work to be done on this bill. There will be numerous hearings, plenty of input from interested parties and lots of time for the public to weigh in.” (View video of Atikins’ full statement:  https://youtu.be/31JbMJjE2zY )

Lara notes that millions of Californians still do not have access to health insurance and “millions more can’t afford the high deductibles and copays and often forgo care…This is the right fight, and the right thing to do for California’s families, children and seniors.”