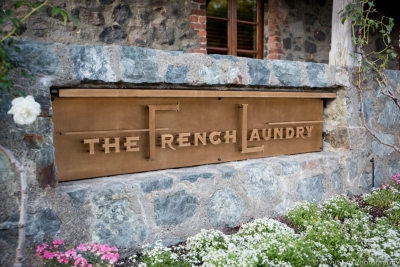 Photo: The exclusive French Laundry restaurant in the Napa Valley, where California Gov. Gavin Newsom and representatives of the California Medical Association, the doctors' lobby, dined at a birthday party for lobbyist Jason Kinney — despite telling the public to avoid such gatherings during the coronavirus pandemic. Photo by K Tao via Flickr

November 18, 2020 (Napa Valley) - The dinner party Gov. Gavin Newsom apologized this week for attending — saying it was a mistake to dine with so many people amid the coronavirus pandemic — included two guests who lobby on behalf of California doctors, the very profession that has been imploring people to refrain from social activity that could hasten the virus’ spread.

Dustin Corcoran, CEO of the California Medical Association, and Janus Norman, the group’s lobbyist and senior vice president, joined Newsom and several other guests Nov. 6 at the French Laundry, an exclusive restaurant in Napa County. Fox LA published photos Tuesday night of the soiree celebrating the birthday of lobbyist Jason Kinney, a longtime political adviser to Newsom. One of the images shows at least 10 people sitting close together at an elegant table, none wearing masks. Norman is seated beside Newsom and Corcoran sits a few seats over.

The revelation is causing some doctors to worry that both government and the medical profession could lose credibility with the public, just as the state is imposing new restrictions in response to surging infections.

“This is a time when we need our political leaders, our civic leaders, our public health leaders, and our medical leaders to all be speaking with one voice,” said Dr. Kirsten Bibbins-Domingo, chair of the epidemiology department at the University of California, San Francisco.

“If… we have several leaders who are apparently acting in contradiction to what they are saying publicly, that puts their credibility in doubt. And that is the biggest challenge with this, is that we really need for voices and actions to be aligned.”

Neither Norman nor Corcoran are doctors, but they represent some 50,000 physicians who are members of the premier group that advocates for the medical profession at the state Capitol.  The California Medical Association has been promoting public health messages amid the pandemic, sponsoring an ad campaign this summer urging people to wear masks.

“Our ability to return to school and work depends on everyone wearing face coverings when they are out in public,” association president Peter N. Bretan Jr. said in an August statement announcing the campaign. “The science is clear — masks help stop the transmission of COVID-19 and are needed to keep Californians safe.”

CalMatters reached Bretan by phone on Monday while working to confirm information that Corcoran had attended the French Laundry dinner party. Bretan said he had no comment and referred questions to the association’s staff, who did not respond to numerous calls and emails until Wednesday morning, when York provided the two-sentence statement.

The controversial soiree is among a handful of events in recent weeks that reveal how some California politicians are flouting public health advice to mingle with lobbyists and others who seek to influence them.

Even as the state put out an advisory last week asking Californians not to travel out of state due to the increasing coronavirus cases, a handful of state lawmakers traveled to Maui for an annual policy conference sponsored by the prison guards union and other interest groups that lobby at the Capitol. They included Assemblymembers Blanca Rubio of Baldwin Park, Wendy Carrillo of Los Angeles, Chad Mayes of Yucca Valley and Jordan Cunningham of San Luis Obispo, according to Politico, and Assemblymember Jim Cooper of Elk Grove, according to KRON 4. And in Fresno last week, Mayor-elect Jerry Dyer announced that he tested positive for COVID-19 after attending a dinner party at the home of a Kaiser Permanente government affairs manager. A Fresno supervisor at the party also got the virus.

Newsom said the French Laundry party followed safety guidelines for Napa County, which was in the relatively permissive orange tier at the time, and said the dinner was held outdoors. Photos show the room has walls on three sides and a sliding glass door that opens to a patio. Newsom acknowledged that he had erred in participating, after spending months telling Californians not to socialize beyond their own household — and even asking people to wear masks “between bites” while dining out.

“I made a bad mistake,” the governor said Monday, after the San Francisco Chronicle broke the news that he’d attended the party.

“The spirit of what I’m preaching all the time was contradicted, and I’ve got to own that. And so I want to apologize to you, because I need to preach and practice, not just preach and not practice.”

Dr. John Swartzberg, a professor emeritus at UC Berkeley’s School of Public Health, said Newsom and medical association leaders who participated in the dinner party displayed poor judgment, potentially damaging their credibility in a way that could discourage people from taking precautions necessary to get the virus under control.

“When people stop following the advice that government gives, then more people get infected and some people die,” he said.

But he added that, overall, Newsom has managed the pandemic well, and said the public health consequences of one bad decision pale in comparison to President Donald Trump’s actions during the pandemic. By throwing large rallies, hosting White House receptions and ridiculing people for wearing masks, Trump’s behavior “is logarithmically more egregious than what we saw going on at the French Laundry,” Swartzberg said.

Bibbins-Domingo, the UCSF epidemiologist, said she hopes people will look at the dinner party as a warning shot rather than a permit to party. It shows how strong the desire is to talk face-to-face with friends, to socialize and share a meal.

“Those gatherings with the people we really want to hang out with — the pull to do that is so strong during a pandemic,” she said, noting that cases of COVID-19 nationwide are spreading at private gatherings. “But that is what oftentimes leads us to take actions that end up harming ourselves, our loved ones, and then increased transmission for the larger community.”

That urge to gather, she added, is something “we all have to resist at this time if we’re going to keep ourselves safe through the winter holidays.”