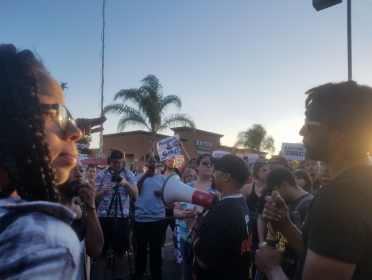 Photo, left, by Rebecca Williamson, during vigil at shooting sight this evening

The updated information reveals the Olango, an El Cajon resident, drew a vape smoking device from his pocket and pointed it at officers. The release also indicates a Psychiatric Emergency Response Team was unavailable due to being dispatched to another call.

A 10 News investigation found  Olango had a criminal record including  a 2005 arrest in Colorado as a felon in possession of a firearm—a semi-automatic pistol in the vehicle he was driving. He also pled guilty to receiving stolen property and driving under the influence in 1999, as well as selling cocaine in 2001.

In this confrontation, however, Olango did not have a gun or any other weapon.  The Ugandan refugee who came to America  after death threats to his famliy was shot and killed after his sister called officers for help due to her brother's erratic actions.

Tonight, crowds clashed with police.  While organizers of a march and vigil sought to keep the peace, some protesters reportedly threw bottles at police and chased a counter-protester wearing a Trump hat after he shouted racial slurs. 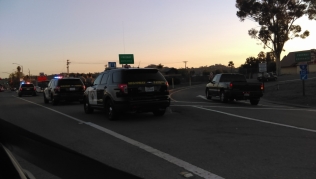 A heavy police presence tonight sought to prevent protesters from blocking Interstate 8. (Photo, right,by Jonathan Goetz; traffic slowdown on I-8).  The public was advised to avoid Mollison and Broadway due to the demonstrations.

The unarmed African-American refugee was shot and killed after his sister called officers for help. Olango,  who has a history of mental health issues including past calls to police by family, was reportedly acting erratically.  Two officers responded to the scene, one pointing a taser at  Olango, the other,a gun. Police have said he ignored orders, paced back and forth and when told to remove his hand from his pocket, pulled out something and pointed it at the officers. 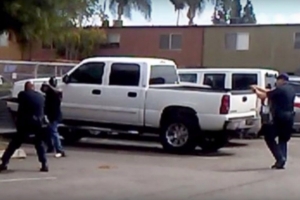 oto (left) showing Olango in what appeared to be a shooter’s stance. Civil rights leaders have called for release of cell phone video obtained by police from a bystander.

According to a press release from El Cajon Police, “The vape has an all silver cylinder (Smok TFV4 MINI) that is approximately 1” diameter and 3” long that was pointed toward the officer.  The box of the vape that was held in his grip, is 4” x 2 1/4”s x 1” (Pioneer for You Vape).  The vape was collected as evidence from the scene.”

As for  questions about why the Psychiatric Emergency Response Team (PERT) was not dispatched to the scene, Lieutenant Rob Ransweiler states, “The El Cajon Police Department does have an agreement with Community Research Foundation / PERT which allows certified licensed clinicians to partner with police officers in the field in order to provide direct support for mental health calls.  On 9/27/16, during the hours of this incident, there was a PERT clinician with a police officer.  At the specific time of this incident, that team was on a different radio call that was also PERT related.  They were not immediately available.”

The officers involved were not wearing body cameras.  However that situation will be changing soon for ECPD officers.

“The El Cajon Cajon City Council authorized the purchase of body worn cameras a short time ago.  The cameras have been ordered, but have not yet been delivered.  When they arrive, the department will conduct a thorough training for both the officers and the community before putting the cameras into use,” Lt. Ransweiler concludes.

Civil rights leaders have called for a Justice Department investigation of the shooting, which comes on the heels of other high-profile shootings of African-American men by white police officers that have prompted protests across the nation, from Ferguson, Missouri to New York City and now,  El Cajon, California.