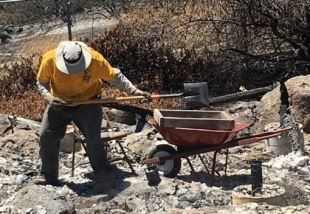 Photo:A member of the California Southern Baptist Disaster Relief team work on cleaning up debris on a property burned during the Potrero Fire.

After the Border Fire swept through rural East County in June, it left burned-out, ashen remains of six homes and 12 outbuildings. To help survivors clear debris, the County Office of Emergency Services turned to some veterans of disaster clean-up: the California Southern Baptist Disaster Relief organization.

The California-based nonprofit responds to disasters all over the United States and the world if requested. The team is part of the National Voluntary Organizations Active in Disaster (VOAD) which has a San Diego branch and coordinates with the County during emergencies such as wildfires. They assisted following the October 2007 wildfires and the May 2014 Cocos Fire, clearing metal frames and roofs, nails, charred wood and mountains of ash from lots.

The organization was recently recognized for its volunteer work by the County Board of Supervisors at its Aug. 2 meeting.

Supervisor Dianne Jacob presented the group with a proclamation, saying the volunteers “come quietly with no media” and “just help because they care.” 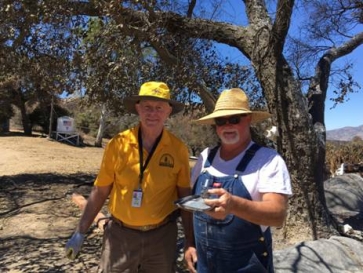 After the recent Border Fire, County damage assessment teams reported the need for debris removal. Bennett Cummings, a senior emergency services coordinator for OES, reached out through VOAD to the California Southern Baptist Disaster Relief, and they were interested. Cummings said he next contacted the property owners and arranged a meeting.

“Southern Baptist will not only do debris removal, but they talk to the residents and can set up screens to sift through ash and to check for mementos,” said Cummings.

In one particularly emotional instance, they did that painstaking work for Potrero resident Bill Cronkrite, 60, who lost his main house and outbuildings.

The California Southern Baptist Disaster Relief group pose with Potrero Fire survivor Bill Cronkrite whose home was burned. They helped with debris removal on his property and were able to recover his son’s military medals and have them replaced.

Cronkrite’s Army sergeant son, Brud Joseph Cronkrite, was killed in the Iraq War, and his medals were in a cedar chest that burned in the house. He told the group the general area where they might be and the clean-up crew marked off an area and sifted the ash for two days before they found the original pieces of the medals.

Escondido resident Jerry Shirley, 72, who worked on that team, said, “It was important to them because we recovered a bit of their son.” Volunteers then contacted the military and were able to replace the medals.

“They got him a new bronze star and his purple heart and a flag that had flown over the MCAS Miramar air wing in honor of my son,” Cronkrite said. “Needless to say, it was very emotional for me. We were trying to get them replaced but I wasn’t having a lot of luck. I will forever be indebted to them. They have my heart.” 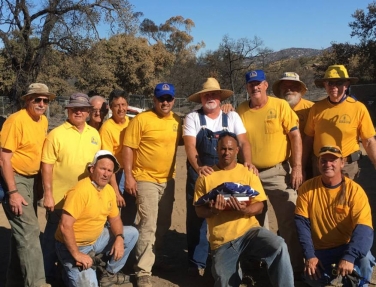 “Someone who just went through a disaster, it is overwhelming for them,” he said. “I’ve never been in a situation like that and I think anything that can be moved off your plate and allow you to focus on the other things is invaluable. The family members are dealing with the emotional effect.”

“They went above and beyond,” Cummings said of the group’s efforts with Cronkrite.

Cummings said the relief organization has specialty equipment to help, such as small bulldozers and chainsaws. Shirley said their team, many of whom live in the San Diego area, received special training to use the equipment for debris removal and also learn about “emotional first aid” which is about listening to people tell their story of trauma. In some cases, if ministry isn’t enough, they may refer to others with more training.

Multiple County departments get involved with various aspects of debris removal and recovery efforts. Homeowners can pay people to clear the debris, but some may be low income or not insured, said Cummings. That’s where groups like the Southern Baptist Disaster Relief can make such a difference.

Portrero resident Bill Cronkrite holds up the burned military medal pieces that were recovered in the ashes where his home once stood by members of the California Southern Baptist Disaster Relief team led by Jerry Shirley.

“I was in a really hard place and I didn’t know what to do,” Cronkrite said. “They cleaned it all up and they were very organized. I don’t believe in my whole life I ever met a finer bunch of gentleman and it really rejuvenated my faith in human nature. This was just a true testament to the good that men do and are capable of.”