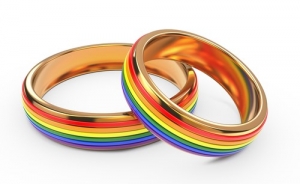 September 8, 2015 (Grayson, Ky.) - A Kentucky county clerk who was jailed for withholding marriage licenses to gay and straight couples has been released today.

Kim Davis of Rowan County, Kentucky was accompanied by presidential candidate and former Arkansas governor Mike Huckabee.  She was met with hundreds of cheering supporters who sang “Amazing Grace” and “God Bless America.”

Davis spent five days in jail, during which she was hailed as a hero by the religious right while denounced by others for refusing to do her job as an elected official. Davis has cited her Apostolic Christian faith as the reason for her stance.

U.S. District Judge David Bunning lifted her contempt order today, saying that he was pleased with how Rowan County deputies were issuing licenses in her absence.  However, she was told not to interfere with the issuing process any further.

She has declined to state whether she will comply with the judge’s order.

Davis was jailed on Thursday after being sued by two gay and two straight couples for refusing to  issue marriage licenses to the couples.  Her act of defiance comes three months after the Supreme Court legalized gay marriage across the country.

All but one of Davis’ deputy clerks issued licenses to gay and straight couples in her absence.  The exception was her son, Nathan Davis.

When the contempt order was lifted, Judge Bunning requested updates every two weeks on the five clerks’ compliance with his order.

William Sharp, legal director of the American Civil Liberties Union in Kentucky, stated the the cases was brought to ensure that all residents of Rowan County, gay or straight, can obtain marriage licenses, CNN reports.  He concludes, “That goal has been achieve.”

...when will we see the Mayor, City Council and Sheriff of San Francisco in jail for refusing to enforce federal immigration law? When will the Sheriff of San Diego, other California Sheriffs and the Chief of Police of Washington, D.C. be arrested for not issuing Conceal Carry Licenses? When will Obama be fingerprinted and jailed for the numerous laws he has failed to comply with? When will Hillary be arrested for holding classified information on a private server? C'mon libs. It's time to enforce laws fairly.