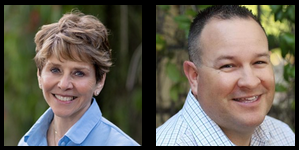 November 13, 2020 (San Diego’s East County) -- As of the Thursday night updates posted by the county Registrar of Voters, East County has several tight races.  The closest is in Santee, where city council candidates Dustin Trotter and Samantha Hurst are separated by just four votes, with Trotter taking the lead after the two were actually tied earlier in the week.

Hurst, a UCSD researcher and instructor, opposes the controversial Fanita Ranch development and supports racial tolerance.  Trotter is a building contractor who has drawn controversy over his involvement with Defend East County, a group recently banned from Facebook, and Working Class Patriot, a group that advocated for people to “pray for peace and prepare for war” on Election Day.

Santee's Measure N, which would give the people a vote on large future housing developments that exceed the general plan's scope, is passing by a margin just shy of a thousand votes.

In the Cajon Valley School Board race between trustee Karen Clark Mejia and Monica Hinton, Mejia currently leads by 231 votes, just over a 2% margin.

Cajon Valley’s School bond measure is creeping closer to the 55% needed for passage and is now at 53.2%.

In the El Cajon District 2 City Council race, it’s still a tight race. Michelle Metcschel has 1,429 votes, Letitia Dickerson 1,363 votes and Stephanie Harper 1,353 votes, with three other candidates trailing behind.  All three are advocates for the homeless, who stand to benefit with any of these three women on the city council.

One of the closest local races is for the Dehesa school board, where the top two vote getters will win seats. Richard White has 403 votes, Karen Kirkpatrick and 372 votes, and Maria Sachez is just two votes behind Kirkpatrick with 370 votes, while Doris Rivas-Brekke has 350 votes – a span of just 53 votes separating the first and fourth place candidates.

So what happens if a race ends in a tie?  According to state law, the outcome would be determined by drawing straws, flipping coins, or another random means.

San Diego Registrar of Voters Michael Vu says all vote counting will be completed by December 3rd, the deadline for counties to certify local elections.