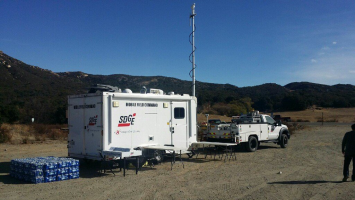 Photo: SDG&E mobile command north of I-8 at Japatul has free wi-fi, charging stations and water for those affected by power outages in East County.

December 8, 2017 (San Diego) -- President Donald Trump has issued a disaster declaration for San Diego County due to the Lilac Fire to maximize firefighting resources and the military is also providing aircrafts to fight the fires. The declaration does not cover rebuilding for fire survivors, which could be made through a separation action later.

The National Weather Service’s revised forecast now indicates high winds will continue through Sunday, so the danger of new fires remains high and all residents are asked to refrain from any activities that could spark a fire.

Countywide, thousands remain without power, many due to planned outages to prevent ignition, others due to damaged equipment and fires. But more help is now available.

The Lilac Fire that started Thursday near the junction of Interstate 15 and highway 76 has scored 4,100 acres and remains zero percent contained as of Friday afternoon. Fueled by powerful Santa Ana winds, the fire has burned at least 65 structures and killed over two dozen race horses, forcing evacuations as far west as Camp Pendleton.

Evacuation enters now open are at the East Valley Community Center in Escondido and Stagecoach Community Park in Carlsbad.

For East County residents left without power, the Bostonia Recreation Center in El Cajon has been opened as an emergency shelter and will accept small pets.  Large animals and livestock can be taken to the Del Mar Fairgrounds.

SDG&E has opened up a mobile command center on the north side of I-8 at Japatul east of Alpine, where you can charge your cell phone or other devices, use wi-fi, and get water.

If you are traveling, be sure to check current road conditions and don’t rely on navigation system such as Warez, that was reportedly directing people onto untraveled roads within the evacuated areas near the fires.

Lyft has announced that it will offer free rides, up to a fifty dollar value, to evacuation shelters for anyone in the evacuated areas here in San Diego County. Just use the code KeepSDSafe.

If you would like to help survivors of the Lilac Fire, here are some actions you can take.

The Red Cross is accepting donations to assist evacuees in shelters.

In addition, the Del Mar Fair Grounds seeks donations of animal feed, bedding, buckets, shovels and rakes for evacuated large animals that it has taken in, including many horses.