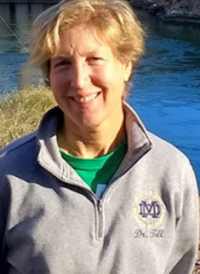 If voting trends continue, the Padre Dam Municipal Water District will see a new face on its five-member board.

Teacher Suzanne Till was leading longtime incumbent Augie Scalzitti by a 48 to 31 percent margin as of the latest tally from the county’s Registrar of Voters early Nov.4.

James Sly, chief operating officer at the East County Economic Development Council, was third at 20 percent of the vote.

The race was in the No. 2 Division. In Division 4, Augie Caires was unopposed and will win his third term on the board. He served as the district’s CEO for 13 years.

Till, a former Marine captain who has a doctorate in water resources geography, campaigned hard on a theme of infusing new blood and new ideas on the now all-male board of directors. She also was highly critical of the district’s water rates, among the highest of any district in the county.

Scalzitti, a retired barber, has been a director on the water board for 22 years, and served as its president for three years.

Padre Dam is one of the largest water districts in the county and provides water, sewer, and recycled water to the communities of Santee, El Cajon, Lakeside, Flinn Springs, Harbison Canyon, Blossom Valley, Alpine, Dehesa and Crest. The agency is partnering with the county, the city of El Cajon, and Helix Water District for an Advanced Water Purification Program. That program entails expanding the district’s wastewater treatment plant in Santee and would convert sewage to potable water using four advanced water treatment processes. The project, which will begin construction in 2022, is estimated to cost more than $600 million.