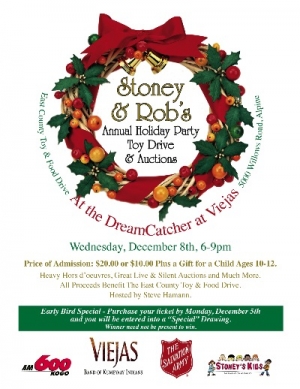 December 8, 2010 (San Diego’s East County) – Donations for the East County Toy & Food Drive are lagging far behind prior years, says Monica Zech, public information officer for the City of El Cajon. “To date, we’ve hardly received any toys,” she said. “I know times are tough, but we usually have individuals and civic groups donating toys by now…I hope you can help.”

New unwrapped toys may be dropped off at all fire stations throughout East County. In addition, the public is invited to a Holiday Toy Drive Party tonight at the Viejas Dreamcatcher Lounge, 5000 Willow Road at Viejas Casinio in Alpine from 6-9 p.m. Admission is $20, or $10 with a new, unwrapped toy. The event includes a silent auction to benefit the East County Holiday Toy & Food Drive.

Next Saturday, December 11 is the annual East County Toy Drive's "Fire Truck Toy Parade" in which fire engines from around the county meet at El Cajon Fire Station 6, 100 E. Lexington Avenue, by 10:00 a.m. The engines load up presents, then a line of fire engines parade from Lexington Avenue to E. Main Street, eastbound on Main Street to Mollison, northbound on Mollison to Broadway, then westbound on Broadway to the Target parking lot at Broadway & Graves - arriving at 11:00 a.m.

Organizers hope that the community will come forward with donations so that no children in need will be disappointed this holiday season.