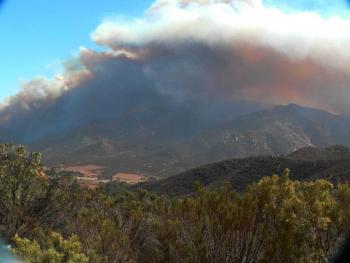 During yesterday's Banner Fire in Julian, our reporter, Nadin Abbott, was at the scene. Several residents complained that they did not receive calls using the 911-directory to advise them of evacuations. Despite efforts by Sheriff officials some residents still said they had no warning at all.  With radio they would have a way to listen and get updates, even if their phones or Internet or electricity for TV etc. is not working.

Also, I feel compelled to dispel a false rumor that was deeply upsetting to me to hear today.  This has NOTHING to do with funding for East County Magazine or Viejas Wildfire & Emergency Alerts.  We receive the same level of very generous sponsorship from Viejas to keep you safe each year--whether or not our alerts air on radio or not.

We thank and appreciate the Viejas Band of the Kumeyaay Indians for caring about keeping you, your family and neighbors safe and informed, and for their generous support that make our wildfire alerts possible.

Now we ask that KNSJ show this same level of concern for people living in areas at risk for wildfires. We have generously helped KNSJ with donations, organizing fundraising events and bringing in new members to support their public radio station. We believe these donations should have been used to resolve any remaining technical issues and assure that live alerts be aired.  Other fledgling community radio stations have live broadcasts, and KNSJ surely can and should, too.

That said, KNSJ's CEO now says more funds are needed ($1,000 to $2,000) with no specific explanation of the technical challenges. If anyone wishes to donate to KNSJ for this purpose or assist with their engineering or equipment needs - and get a written guarantee from KNSJ that this time, donations would guarantee the alerts begin airing immediately, please let me know at editor@eastcountymagazine.org and I will put you in touch with the station CEO.

Readers, if you care about wildfire alerts live during emergencies, please vote at the link above and then post your commments section below--and ask your friends to vote, too!

As a broadcaster myself, KNSJ is worthless as far as emergency info. They are not required to be a part of the Emergency Broadcast Alert. KOGO AM 600 is the county emergency station so they would be responsible for this but their news team is a joke! As a ham radio operator, our team would be more reliable

That said, KNSJ 's station is tied in to the emergency broadcast network (the one you hear those test signals for) but that only covers the most major emergencies.

We alert on far more through our East County Wildfire & Emergency Alerts which you can sign up to receive via email and/or Twitter.

That said, KNSJ does have the ability to interrupt programming and go live if there's a truly region-wide emergency. They've done so a handful of times during major firestorms briefly but without adequate funds, it's not the best means for getting your emergency information at this point.

The station is better at reporting local news,  playing local music, etc. for programs that can be pre-recorded.  Maybe someday that will get better. They are trying to find a second signal location.  They actually got permission for one on tribal land but then the tribe decided it wanted to use that land for something else.