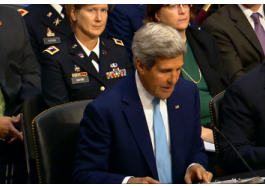 September 12, 2015 (San Diego’s East County) – Today, Secretary of State John Kerry announced the U.S. will raise its cap on refugees from the current level of 70,000 to accept 85,000 next year and 100,000 in 2017. The news comes in response to a growing refugee crisis of people fleeing ISIS in Syria and Iraq, including Christians and other minorities as well as Muslims.

That came as welcome news in El Cajon, where Iraqi-American Christians are celebrating at the Chaldean Festival.

Mark Arabo, a spokesman for the Chaldean community in the U.S., has been advocating for a raise in the refugee ceiling, including meetings at the White House and with Secretary Kerry.

His communications director, Lundon Attisha, called the news a “major step forward” in a statement issued today, adding, “This, for many in the Chaldean community is a moment of celebration.”

Though Kerry’s order does not specify how many Chaldean refugees will be admitted, Arabo aims to seek assurances that a sizeable number will be Chaldeans and other religious minorities, Attisha said.

Earlier this month, the White House indicated it would take in at least 10,000 Syrian refugees, after 4 million Syrians have fled their nation and currently are residing in United Nations refugee camps.  Hundreds of thousands more have taken refuge in Europe, while the U.S. has accepted only 1,500 Syrian refugees.

Kerry has indicated background checks will be conducted to week out potential terrorists and that  the U.S. refugees accepted from Syria will come off a list the U.N. prepared before the influx of migrants to Europe, the New York Times reports. Some of the refugees will also include Africans threatened by human rights abuses, including immigrants from the Democratic Republic of the Congo.