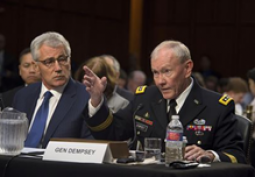 Residents of Raqqa, the Islamic State’s self-proclaimed capital, have reported attacks on the city on social media sites.  An estimated two-thirds of ISIL forces are located in Syria.

Defense Secretary Chuck Hagel has said that the plan "includes targeted actions against ISIL safe havens in Syria, including its command and control logistics capabilities and infrastructure."

ISIL, the terrorist group which calls itself the Islamic State, is called the Islamic State of Iraq and the Levant by the White House and Pentagon. ISIL has forged a destructive path, seizing large portions of Iraq and Syria  ISIL fighters have slaughtered thousands  of innocent civilians and forced millions of people in Iraq and Syria to flee their homelands, creating a  humanitarian crisis.  The victims face torture and death if they refuse to convert to Islam; ISIL is also selling women and young girls into slavery and forcing some into marriage with ISIL fighters.

The group also beheaded American journalists and has called on ISIL supporters to wage attacks on Americans in the United States.

The move has drawn praise from some but concern from others. But  Representative Charles Rangel has called for a draft and a war tax, so that all Americans will weigh heavily the costs and consequences of war.

A protest is planned in front of the White House by the National Campaign for Nonviolent Resistance on Tuesday. Among those who will be speaking there is Medea Benjamin, who issued a statement Monday,"This is exactly what ISIL wants. They're trying to get the U.S. involved in a war. There are already U.S. troops in combat and this will mean more. We shouldn't fall into the trap of another immoral and unwinnable war."

The Washington Post reports that top defense officials have confirmed that all foreign partners participating in the airstrikes against Syria are Arab nations, a condition President Obama set for the U.S. to extend airstrikes into Syria.  The Arab allies named are Saudia Arabia, the United Arab Emirates, Jordan, and Bahrain.

On September 20th, in an address to the nation, the President outlined his rationale for U.S. involvement. He made clear that the U.S. will not send ground troops and that the stakes extend far beyond the Middle East. The President also made clear, “This is not a war of the U.S. versus ISIL, but of “the world versus ISIL.”