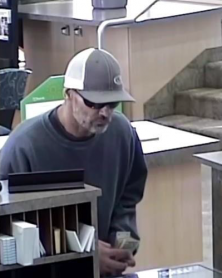 January 13, 2019 (El Cajon) – The U.S. Bank located at 2755 Navajo Road in El Cajon’s Fletcher Hills neighborhood was robbed today at 3:13 p.m. The suspect is described as a white man in his 30s with numerous acne scars on his face, unshaven with a full mustache.  He is approximately 6 ft. 1 inch tall and weighs about 180 pounds. He was wearing a gray long-sleeved shirt, baggy blue jeans and a dark gray hat with mesh on the back.

According to El Cajon Police Lieutenant J. Larson, the suspect walked up to a teller and stated, “This is a robbery, give me all your large bills.”  No weapon was seen.

The teller provided money to the suspect, who fled on foot. He was last seen running south on Fletcher Parkway near the intersection at Navajo Road and Fletcher Parkway.

“The FBI responded to the scene and will be working with the El Cajon Police Department during this investigation,” says Lt. Larson. 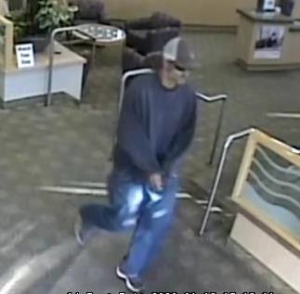