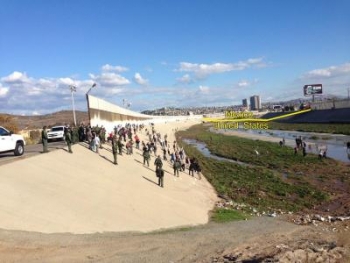 The group advanced toward a Border Patrol agent an eighth of a mile north of the border.  The agent ordered the group to stop, but the crowd ignored his commands and advanced. The agent deployed his PepperBall Launcher System, an intermediate use-of-force device, in an effort to stop the group and protect himself.

When the crowd still failed to stop, numerous agents responded to the scene as the crowd became increasingly unruly and began throwing rocks and bottles, the Border Patrol reports. The crowd struck several agents in the arms and legs with rocks; one agent was hit in the head with a filled water bottle.

Paul Beeson, San Diego Sector Chief Patrol Agent said, “While attacks on Border Patrol agents are not uncommon, the agents showed great restraint when faced with the dangers of this unusually large group, and fortunately no one was seriously injured.”

It is unknown who organized the group that sought to swarm over the border.. An anonymous video of the confrontation, however, has been posted on a Mexican blog site.

La Prensa newspaper reports that the effort was promoted with a flyer delivered to Tijuana sites frequented by deported immigrants. The director of the Southern Border Communities Coalition, Christian Ramirez, called it an "act of desperation."  He added, "They are deported people who have no chance of earning a living in Tijuana. This is a reaction by a sector that finds itself abandoned."

Border Patrol told 10 News the agency is concerned that the assault could be a dry run for a potentially larger altercation.

No one was arrested and no one was able to continue north into the United States.