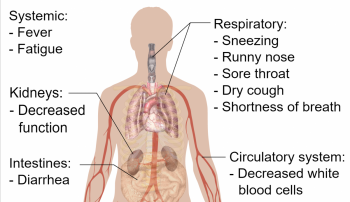 California outbreak may be tied to botched federal response

March 1, 2020 (San Diego) --  President Donald Trump is facing criticism for disbanding the team of scientific experts in 2018 who would have been tasked with preparing for and handling pandemics in the United States, to cut costs. He left vacant key posts at the Centers for Disease Control in charge pandemics and further sought to slash CDC funding. His administration also allowed some exposed cruise ship passengers back into the U.S.without waiting for test results.

Now Pres. Trump has put Vice President Mike Pence in charge of the U.S. response to the COVID-19 outbreak, instead of health officials, the New York Times reports.  Pence will also handle all White House messaging on the virus, a move that has critics concerned that health and science experts could be muzzled.  Pence has previously drawn criticism for his handling of an HIV epidemic in Indiana that slowed efforts by public health officials to contain the disease.

Trump has drawn sharp bipartisan criticism as well as Senate Republican committee chairs and global health officials for his handling of the COVID-19 crisis.  The disease to date has infected over 85,000 people in 60 nations, killing nearly 3,000. The first U.S. death occurred in Kirkland, Washington, where an outbreak is suspected at a skilled nursing facility at which dozens of residents and healthcare workers have fallen ill.

“Concern about the coronavirus continues to grow, yet the Trump administration’s response has been inadequate, misleading, and dangerous,” Vermont Senator Bernie Sanders said, adding, “By picking Vice President Mike Pence to lead the administration's response to the pandemic, Trump has not only chosen someone completely unqualified, but the president has made clear that he’s more concerned about his own politics than the health and safety of the country.”

During a political rally, Trump dismissed Democrats’ criticisms over his handling of the coronavirus as a “hoax.”

The Republican chairman of the Senate Appropriations Committee at Azar's hearing accused the administration of making a “low ball” request. “It could be an existential threat to a lot of people in this country,” warned Alabama’s Republican Senator Richard Shelby. “So money should not be an object. We should try to contain and eradicate this as much as we can, both in the U.S. and helping our friends all over the world.”

During the Homeland Security budget hearing, Republican Senator John Neely Kennedy of Louisiana blasted Wolf for not providing enough information about risks from the outbreak. "You're supposed to keep us safe, and the American people deserve some straight answers on the coronavirus, and I'm not getting them from you,” Kennedy said.

COVID-19 has two confirmed cases of community spread in the proximity of Travis Air Force Base (AFB) in northern California, after politicians effectively over-ruled the Centers for Disease Control (CDC) airlifted 14 infected persons out of quarantine, bringing them instead to California without waiting on test results.

The Centers for Disease Control (CDC) originally recommended Diamond Princess passengers stay in quarantine docked safely outside Japan. Congressman Phil Roe (R – TN) had a friend onboard, and insisted on repatriation against the professional and scientific assessment of the CDC. The Congressman eventually won out.

The Bay Area is now ground zero of COVID-19 community spread in the United States. Some suggest it may have been spread among improperly protected healthcare workers, and may have been less likely were authority vested in the hands of scientists and professionals, instead of politicians.

The novel coronavirus that causes COVID-19 so far has one case community spread each in Solano and Santa Clara counties in northern California, as well as cases in Washington County, Oregon, and Snohomish County, just north of Seattle.

Solano County is home to Travis Air Force Base (AFB) and Santa Clara County is only 90 miles away. Some suspect COVID-19 in those two counties is coming from inadequately protected healthcare worker(s) involved in the transportation of people airlifted out of a quarantine zone, the Diamond Princess cruise ship, and taken for another quarantine at Travis AFB. 14 passengers testing positive for the virus were allowed entrance to the United States perhaps due to political favoritism.

These four cases are notable among the 53 cases of COVID-19 identified as of February 28, in the United States, because these four people did not travel to countries or provinces known to be impacted by COVID-19, such as China, Italy or South Korea, nor did they have any known local connection to other confirmed cases. These are called cases of unknown origin. These four people likely acquired the illness locally from an unknown carrier, perhaps an improperly equipped healthcare worker. This has changed the testing policy from only testing those who have traveled recently, to testing anyone with symptoms; however even people with no symptoms are now believed to be capable of transmitting the disease.

Some countries in Europe, Asia and elsewhere are shutting down major events such as festivals and conferences to prevent spread of COVID-19, but the U.S. has ordered no such measures to date.

WHO has urged all nations to make sure healthcare workers are properly trained and that hospitals have adequate equipment including respirators and oxygen, as well as appropriate testing materials, among other things.

Some major airlines and other carriers have canceled travel plans to areas such as China, Hong Kong due to COVID-19 fears.

Many travelers are also cancelling trips abroad.  Airlines, hotels and other travel industry companies have been largely cooperative in issuing refunds for trips booked before the outbreak, but consumers are advised to check with their travel companies for information.

Myths are also fueling spread of misinformation.  Social media sites have blocked some fake news about COVID-19.  Corona beer sales are reportedly plummeting, though the beer is made in Mexico, not China, and has no connection to the COVID-19 outbreak.

There are also reports of racist taunts and backlash against some people of Chinese, Asian and/or Pacific Islander origin. However, Asian Americans are no more or less likely than others to catch COVID-19.

Trump himself has spread misinformation, such as stating that he expects the outbreak to end when the weather warms up, though the disease discovered in December is too new  to determine whether it is sensitive to temperature and humidty changes or not.

The best way to avoid getting sick, and to prevent spreading illness to others, is to wash your hands thoroughly with soap and water throughout the day, avoid touching your face, stay home if you're sick, cover your coughs and sneezes in your elbow or better yet with a tissue, and clean frequently touched surfaces.

Symptoms of COVID-19 include fever, cough and severe shortness of breath. If symptomatic, make testing arrangements by telephone to avoid infecting others in the hospital.