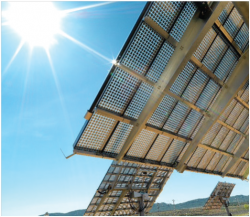 April 1, 2014 (San Diego’s East County) – Soitec’s four proposed solar projects on 1,490 acres in the Boulevard area of East County could negatively impact migratory birds, eagles, endangered butterflies and wildlife corridors,  Karen Goebel, assistant field supervisor with the U.S. Fish & Wildlife concludes in a comment letter sent to the County regarding the projects’ draft Enviornmental Impact Report (DEIR) on March 11, 2014. The letter also indicates studies have been inadequate and cumulative impacts of projects across a broader area need to be evaluated.

The projects lies within the Pacific Flyway for migratory birds, but collision risks are not adequately addressed in the DEIR, the USFW concludes.  “Some species of birds, such as waterbirds, may perceive the solar field as a water body (commonly known as ‘lake effect,’” the letter states.

The letter also warns of habitat loss for birds, since Soitec’s past projects have scraped bare vast tracts.

In addition, the topography has had eagle nests in the recent past and currently, the habitat on the site supports prey that the eagles feed on.  The developer’s DEIR claims eagles no longer nest in the area, but the USFW disagrees because “eagles will reuse nest sites that have not been used for more than five years.”

Moreover the survey relied on helicopter surveillance that doesn’t provide early breeding season information and further, only juvenile birds were fitted with transmitters, providing no information on adult eagles.  The USFW wants to see more studies in all seasons.   The federal wildlife agency also recommends a bird and bat conservation strategy for the projects.

In addition, USFW voiced concern that endangered Quino Checkerspot butterflies recently spotted near the property could be harmed.

The USFW letter detailed its concerns regarding each of the four proposed projects, as well as alternatives.

Only one of the four sites, Tierra del Sol, would have “minor impacts” that could be mitigated, in the view of the USFW.  The others had severe impacts on wildlife and habitat.

The Rugged site is entirely within the Focused Conservation Areas  near  a protected area within the East County Multiple Species Conservation  Program (MSCP) boundaries.  The USFW concludes that “loss of this site would hinder efforts to expand and connect to the large protected Bureau of Land Management (BLM) and State Park lands to the north and east.”

As for LanEast and LanWest proposed sites, plant and wildlife studies were not completed, inexplicably.  But USFW observes these sites are of “high importance to regional conservation” since they are located “entirely within FCAS for the draft East County MSCP and provide the most viable north-south connection for wildlife movement across Interstate 8 via the undercrossing at McCain Valley Road.” Thus development of these two sites “will conflict with the conservation objectives of the East County MSCP planning agreement and may compromise the establishing of a viable preserve.”  A more thorough wildlife analysis is needed, says the USFW.

The letter also discussed Los Robles, a potential alternative solar site.  This alternative is entirely within FCAs for the draft East County MSCP, thus is as “potential to limit connectivity between wildlife in Mexico and the large blocks of protected habitat north of Interstate 8.”

A proposed mitigation site is inadequate, the report concluded.

In addition, USFW raised concerns over what it calls a “misleading analysis” of the projects’ cumulative impacts.  The DEIR chose too small an area and should instead examine cumulative impacts of  projects proposed or built within the entire renewable energy corridor, from Jacumba to Campo, and from the Mexican border north to the Peninsular Range Eco-Subregion.

is a government agency which is supposed to obey the law really going to do the right thing? I hope so. the green energy scam is just that. a mix of sources is needed and intelligent planning and siting is required, not shrillness and greed. take away the government corruption via tax credits and hidden ownership's and it will crumble over night.
Exactly right, Deserttrek.
A government agency, Fish and Wildlife, is stepping up to the plate for what's right!
Good news. The Fish & Wildlife report can only add heft to the already massive objections to these highly destructive solar and wind farms. Land, plants, animals--nothing escapes. Let's hope and pray that this mechanical monstrosity never makes it off the planning board.