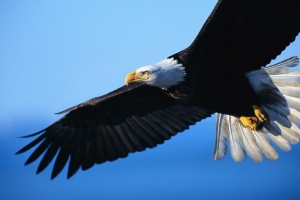 September 1, 2014 (Washington D.C.) – Two former investigators with the U.S. Fish and Wildlife Service are speaking out to say that the federal government is ignoring harm to wildlife caused by industrial scale wind and solar facilities.

While the government is prosecuting oil companies for violating laws protecting birds of prey, it is hypocritically giving permits that allow renewable energy companies to kill the same species, including federally protected eagles, without any consequences.

The National Review published an article featuring interviews with the whistleblowers.

Tim Eicher, a retired special agent with U.S. Fish and Wildlife Service, says if birds are electrocuted or die in oil pits, they face prosecution.  But regulators with the federal agencies believe that global warming justifies pushing through wind and solar without regard for bird deaths.  He says, “They’re saving the planet, and if eagles die in the process, so be it.”

Dominic Dominici, another former investigator with the agency, confirms that the federal government is “prepared to turn a blind eye” to negative aspects of so-called green energy projects. Not only does the government fail to prosecute wind or solar companies that kill birds, they are now even granting those companies permits allowing them to kill protected bird species with no consequences. Anyone else doing so could face felony prosecution.

Case in point: Duke Energy. After investigators found 14 dead eagles and 149 other protected birds dead at Duke’s wind farms in Wyoming, the company did become the first renewable energy corporation to face prosecution for bird fatalities under the Migratory Bird Treaty Act. But after paying fines far smaller than those imposed on fossil fuel companies for the same offense, the company was encouraged to apply for “take permits” from Fish & Wildlife which allow it to kill a designated number of eagles and other raptors in the future without further consequences.

The House Natural Resources Committee has attempted to investigate this bias in enforcement of laws protecting endangered and migratory birds. In March, the committee subpoenaed case files for federal investigations under the Migratory Bird Treat Act and the Bald and Golden Eagle Protection Act.  But a committee representative told National review that Fish & Wildlife Services has stonewalled, failing to turn over complete records and submitted heavily redacted texts.

The U.S. Fish and Wildlife does not comment on pending investigations or prosecutions.

Not everyone agrees that enforcement has been too selective. Mike Daulton, vice president of government relations at the Audubon Society, voiced skepticism and said he has heard that some cases are in the pipeline at the U.S. Department of Interior and the Justice Department.

But American Bird Conservancy director of public relations Bob Johns says numbers don’t lie, and there is a double standard. He cites Altamont’s wind farms in California, where at least 70 to 80 golden eagles have been killed each year now for many years – yet the company has never been prosecuted.

There have also not been any prosecutions made public against industrial-scale solar companies, not even Ivanpah, which some reports estimate may be responsible for 28,000 bird deaths a year. The solar flux technology appears to attract insects on which birds feed; the high-intensity beam from the solar tower at Ivanpah is burning birds alive including migratory waterfowl such as pelicans.

Eicher says that while fossil fuel companies can prevent many bird deaths with precautions such as putting netting over oil pits, there is nothing that can stop a wind turbine from killing eagles, other than shutting it off or tearing it down.

Major concerns have been raised by wildlife experts over potential eagle and other raptor deaths if Tule Wind is built in San Diego’s East County. The project was approved by the federal government based on studies conducted by David Bittner and paid for by energy companies. Bittner was convicted in federal court on charges of mishandling protected birds. He operated without licenses for years, refused to turn over tracking data on protected species to federal wildlife officials, and was found to have four freezers full of dead birds kept illegally, as East County Magazine has previously reported.

I am sending my letter off today.
I will also remind everybody that in the case of Dave Bittner, who put telemetry tracking devices on eagles , "Federal service agents visited Bittner in 2012 and inquired if he had any eagle carcasses. Bittner took the agents to four freezers on the property and they found 11 deceased golden eagles" It was never disclosed the cause of death to these eagles or how Bittner came to be in possession of so many eagle carcasses. The 11 deceased golden eagles no doubt were sent on to the National Eagle Repository in Denver. It was also not disclosed if other eagle and raptor carcasses had been previously sent by Dave Bittner to the Eagle Repository.
If anyone is wondering why conservation groups like Audubon are supporting these spinning monsters, here is the reason. These groups are receiving mitigation funding from wind farm installations. In other words they are also soaking taxpayers. They complain, get media attention, and file lawsuits, but in the end it comes down to them getting a financial cut. In a recent email Audubon member Brian Murphy had this to say about this conservation group taking the money........."At a Mt. Diablo Audubon meeting we had a presentation by California Condor Recovery Program. After the presentation I asked why they signed off on a permit for a Southern California wind farm to 'take' condors." "He said they looked at 'the big picture' and accepted funding for their program for the next 10 years by the wind farm as acceptable mitigation for loss of a few condors." "This is an example of moral bankruptcy as they sold out Condors to have jobs for the next 10 years." The slimy settlement at Altamont Pass between Audubon and the wind turbine peddlers is a complete disgrace and should be investigated because the slaughter has not declined as it would said be. Instead the industry is just rigging their studies to make it appear that mortality has been decreased. In addition hundreds of raptor bodies have been pulled from data and labeled incidental. In the meantime with Audubon blessings, the turbine peddlers continue to install far more deadly rotor sweep into to this region. As for an investigation into all this fraud, it will never come under this administration because they are up to their necks in "green" manure.
Speak your mind regarding the slaughter of eagles by wind turbines.............. Those planning to make comments on the proposed 30 year eagle killing permits for the wind industry should do so before the deadline on Sept 22. Do not beat around the bush with your statements. If you think they are liars, tell them. If you think they have been hiding the bodies of endangered species and thousands of eagles killed by wind turbines, tell them. If you think they are rigging studies (which I have proven many times over) and surveys, tell them. If you believe that having wings or legs chopped off by a turbine blades and then left to die is 1st degree animal cruelty, tell them. Then make them answer very direct and uncomfortable questions. Do not worry about being polite because they do not deserve it. Also remember this, the FWS answers to the Interior Department and the Interior Department unfortunately answers to the wind industry. These are the bad guys in this and the corruption taking place flows down in this order. Lastly I will point out something very obvious....... The Industry has only "reported" a handful of bald eagles ever having been killed by wind turbines across America. Yet in new projects where their bodies will be found by the public in less isolated turbine locations, the FWS estimates that 15-43 Bald Eagles will be killed annually by a single project like the one planned for Chesapeake Bay. How could such eagle mortality estimates ever be made when tens of thousands of turbines running for decades across the remote regions of America have reportedly killed just 6 bald eagles? The reason for this absurdity is that they (FWS and Interior Department) already know how deadly these turbines are to bald eagles. They know this from the unreported bald eagles being killed at wind farms and their carcasses then shipped off to the National Eagle Repository. Since 1997 approximately 28,600 eagle carcasses in increasing numbers, have been shipped to Denver. Of these carcasses, approximately 18,000 have been bald eagles, the others golden eagles ( For more on this topic read the "Voice of Dead Eagles"). The public only knows what happened to 6 of these bald eagles (Pagel FWS 2013). Last year the parts ("pieces") and bodies from 1795 bald eagles were reported being shipped to the Repository. As I pointed out earlier if you think they are liars tell them before Sept. 22.