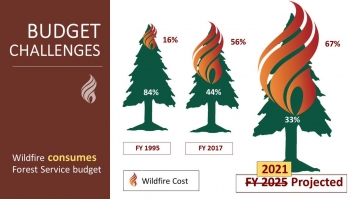 October 2, 2017 (Washington D.C.) – The U.S. Forest Service, in a series of messages sent on its Twitter account, warns that the growing cost of wildfires is taking money from other programs –including those that reduce fire threats.

In 1995, wildfires accounted for 16 percent of the agency’s budget. This year, fighting fires has taken 56% of all U.S. Forest Service resources.  As conditions worsen across the West, wildfires are projected to consumer two-thirds of the agency’s overall budget by 2021, four years from now.

“Our mission is to sustain America’s forests and grasslands, but it's consumed by the growing costs of #wildfires,” the agency warns.

That challenge comes amid budget cuts at the federal level, and increasingly hot, dry temperatures fueled by climate change, scientists report, though the Trump administration refuses even to acknowledge the existence of climate change, let alone take steps to slow climate change or expend funds to reduce its impacts.