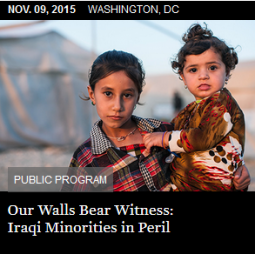 Naomi Kikoler, deputy director of the U.S. Holocaust Memorial Museum’s Simon-Skjodt Center for the Prevention of Genocide, who traveled to northern Iraq as part of the Museum’s Bearing Witness trip to document the plight of religious minorities in the country.

The Museum’s exterior photo exhibition will run nightly, Nov. 9 to 12, from 5:30 p.m. to 9 p.m. as part of FotoWeekDC 2015. The display features photos taken by Mackenzie Knowles-Coursin, an international photographer focused on documenting the migration and statelessness of vulnerable populations. Knowles-Coursin traveled to northern Iraq with Kikoler to research and capture the aftermath of the Islamic State’s brutality.

In 2014, the Islamic State waged violent attacks against civilians in northern Iraq, kidnapping or killing thousands of ethnic and religious minorities. More than 800,000 Yezidis, Christians, Turkmen, Shabak and Kaka’i fled to escape the violence. More than a year later, the lives of these people remain in peril. Through vivid imagery, this event tells the story of the Yezidis and other ethnic and religious minorities and the humanitarian crisis that desperately needs the attention of the global community.

To learn more, follow the hashtags #WallsBearWitness and #IraqCrisis on social media.