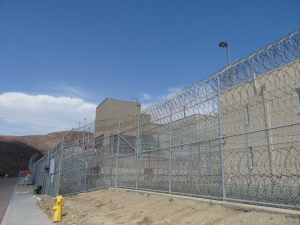 According to the Inspector General’s report, the Federal Bureau of Prisons spent $639 million on outsourcing convicts to for-profit prisons in 2014. But in recent years, “disturbances in several l federal contract prisons resulted in extensive property damage, bodily injury, and the death of a correctional officer.” That report analyzed 14 contract prisons and found they were worse than government-run prisons in most categories including higher rates of assaults by inmates, contraband seized, lockdowns and more. The report also found prisoners were thrown into solitary confinement without justification for extensive periods, a violation of federal rules. Some inmates were even denied basic medical care.

The announcement by the DOJ to drop private prisons came after Mother Jones magazine published an epic 35,000 word investigative report written by a reporter who went undercover as a private prison guard for four months at a Corrections Corporation of America (CCA) private prison in Louisiana.

His report revealed a pattern of guards engaging in or turning a blind eye to violence, abuse and neglect.  One prisoner denied medical care despite nine requests lost both legs two fingers to gangrene. There was no full-time psychiatrist for 15,000 inmates. The company also cut corners food, medicine, and even security costs to maximize profits; one prisoner escaped while guard towers were unmanned.

Halting use of private prisons by the Department of Justice won’t happen instantly.  But existing contracts will either not be renewed or substantially reduced, according to Yates.

Private prisons are used by other federal agencies including Immigration and Customs Enforcement (ICE), which has a detention center in Otay Mesa locally run by private prison contractor CCA—the same contractor exposed for allowing horrific abuses in the Mother Jones exposé.

Senator Patrick J. Leahy (D-Vt.) called Thursday’s announcement “an important first step in addressing this unacceptable situation, but it is not enough. We must insist that these changes are adopted by all federal agencies, including the Department of Homeland Security, which relies heavily on private prisons even for housing vulnerable women and children. Incarceration should not be a for-profit business,” the Los Angeles Times reports.

Some states including California also rely on private prisons.

In response to the Department of Justice's recent decision to end the use of private prisons, the Southern Border Communities Coalition released the following statement:

The Southern Border Communities Coalition (SBCC) applauds the Department of Justice's decision to phase out the use of private prisons. When it comes to these corporate- run detention facilities, the jury is out: they are more violent, more prone to abuses and less safe for everyone. We call on the Department of Homeland Security to do the same and put an end to these abusive private detention facilities, which will always put profit before people. Every year, thousands of immigrants and their families are thrown into these facilities and routinely abused; some are even killed. SBCC will continue to fight to end these inhumane facilities and provide a voice for those who can not speak up.