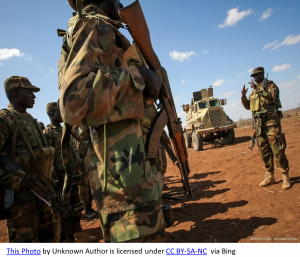 “I have concerns about the legal justification of the recent strikes, particularly as they seem to have been conducted without White House approval.” – Congresswoman Sara Jacobs

July 24, 2021 (San Diego) – The Pentagon has launched two airstrikes this week targeting combatants with al-Shabaab, an al-Qaeda affiliated terror group in Somalia. The air strikes come after a six-month pause in airstrikes that were halted after Joe Biden replaced Donald Trump as U.S. President.

The New York Times reports that the al-Shabab fighters were attacking Somali forces in the norther part of Somalia. The Pentagon has stated that its Africa Command authorized the airstrike to defend allied Somali forces that came under attack as American military trainers advised them remotely.

“We see threats in Somalia to regional stability,” AFRICOM Commander General Stephen Townsend stated during a virtual defense forum late last month. “We even see threats there to the U.S. homeland,” Voice of America reported.

That threat has arisen after Trump ordered a drawdown of U.S. troops in Somalia in the waning days of his presidency.  Trump ordered most of the 700 American troops in the region withdrawn and sent to neighboring Kenya and Dijbouti. A recent intelligence report warned that al-Shabaab has acquired more drones and voiced concerns that the terror group could begin weaponizing drones.

The Biden administration placed new limits on drone strikes outside of active war zones when it took office January 20 and rejected earlier requests by the military’s African command to Carmen out drone strikes before this week’s actions.

But the drone strikes drew criticism from a bipartisan group of Senators who unveiled legislation Tuesday to curtail presidential war-making powers. The Senators included Republican Mike Lee of Utah and Democrats Christopher Murphy of Connecticut, as well as independent Bernie Sanders of Vermont.

San Diego Congresswoman Sara Jacobs, a Democrat, also issued a statement indicating she is “deeply troubled by the news of the United States conducting airstrikes in Somalia this week. While I have been encouraged by the Biden Administration’s ongoing review and restrictions of the drone program, I have concerns about the legal justification of the recent strikes, particularly as they seem to have been conducted without White House approval.”

She adds, “The lack of consistent consultation with Congress on matters of war is deeply problematic and contributes to a foreign policy that fails to connect our actions on the ground with our foreign policy objectives, the lives of the American people, and the lives of people in other countries.” She called for Congress to  have “robust oversight of war powers” and for the U.S. to have a “cohesive strategy to address the underlying grievances that contribute to violent extremism  and instability in Somalia and around the world.”