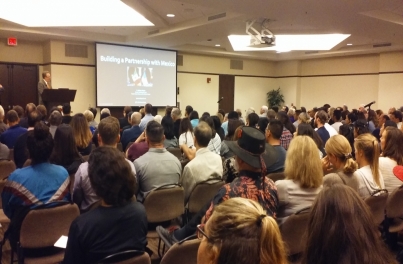 September 15, 2016 (San Diego) - Former United States Ambassador to Mexico Anthony Wayne, speaking at San Diego State University on Monday, estimated that products made in Mexico and exported to the U.S. contain 40% U.S. components.   As examples, he cited Honda’s CR-V, which contains a motor and transmission made in the USA.

One could suggest that if this data set were applied to the US trade deficit with Mexico that it would be enough to eliminate it.

If components inside our imports were included as American and calculated at 40%, that would add an additional $126.56 billion as American, bringing the negative $49 billion trade deficit with Mexico to a positive $77 billion surplus, meaning that even if the content of Mexican made products were at least 16% USA, that would be enough to eliminate the trade deficit of the United States and Mexico. 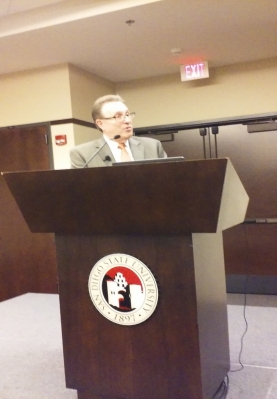 Former California Assemblyman Howard Wayne attended the lecture, and grilled the Ambassador on his support of the North American Free Trade Agreement (NAFTA). “Has the trade deficit gone up or down since NAFTA?” to which Anthony Wayne responded “It’s gone up.”

He suggests that rather than being focused on the problem that we should be focused on the solution. He believes that education is the foundation for any country in the world for competitiveness and being successful and presented evidence that European countries as a share of their budget provide much greater amounts to worker retraining than we do in the United States.

Wayne points to Mexico’s reforms on education, telecommunications, energy and judicial and law enforcement as reasons to do more business with the nation.

He states by allowing competition to Pemex that the United States, Canada and Mexico can have shared energy security. Additionally, justice system reforms in Mexico changing it from an inquisitorial (written) system to an adversarial (hearings) system, making it a fairer place with increasing respect to human rights.

Mexico, our third largest trading partner, is actually our second largest export market. We export more to Mexico than we do to Brazil, Russia, India and China combined.