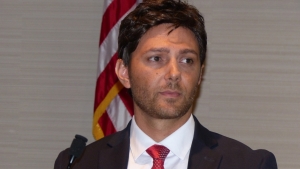 The article also references Kalasho’s history of attacks on ECM, its editor and reporter, including defamation and inciting threats of violence online.

The U.S. Press Freedom Tracker site documents “selected public threats made to reporters and media organizations by U.S. politicians and other public figures, which can have a chilling effect on journalism.”

He must feel special and powerful. Yet even the ones at the top of the human food chain can, and have fallen from their self made delusional thrones. Kalasho / Trump - one democrat, one republican. Both seem to hate the press, unless they are exalted in the news. Yet they are so alike in their thinking and behavior, one would think they are related somehow. If Ben thinks he's such a tough guy, then why threaten an innocent man with a vicious dog, followed up with a not so veiled threat of shooting him with a gun? Particularly since Paul didn't do anything wrong. Trump acts the same childish way. If he disagrees with someone, fire that person, have them thrown out of a rally, trash them on Twitter or whatever. People like these basically twist the truth around and deflect focus onto the wronged person in an attempt to make them appear like the guilty party, not themselves - the true evildoer. Well Mr. Kalasho, you posted on your Facebook "make me famous". Seems as if you achieved your goal - and then some... INFAMOUS! How proud you must be.