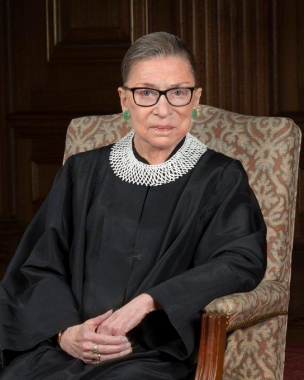 On her deathbed, she told her granddaughter: "My most fervent wish is that I will not be replaced until a new president is installed."

September 20, 2020 (San Diego) - Sparking a swift flood of condolences along with fear for what the future holds, the U.S. Supreme Court announced that Justice Ruth Bader Ginsburg died in her home Friday evening, surrounded by family, due to "complications of metastatic pancreas cancer" at the age of 87.

Since Ginsburg was nominated to the high court by President Bill Clinton in 1993, she has gained global notoriety for her impact on gender equality and civil liberties in the United States, with fans affectionately nicknaming the tireless and trailblazing justice "Notorious RBG."

Her death, which comes after a series of recent health scares that provoked public alarm, means that President Donald Trump may have the opportunity to name her successor, with help from the Republican-controlled Senate, in the weeks before the November 3 general election.

In the days before her death—which will undoubtedly spur more political chaos ahead of an election with incredibly high stakes—Ginsburg dictated a statement to her granddaughter Clara Spera: "My most fervent wish is that I will not be replaced until a new president is installed."

Social media and news sites on Friday quickly filled with calls for honoring RBG's dying wish—and concerns about what it will mean for the country if Trump and the Senate force through another nominee—but also touching tributes to Ginsburg, long celebrated as a feminist icon.

"The passing of Justice Ruth Bader Ginsburg is a tremendous loss to our country," said Sen. Bernie Sanders (I-Vt.). "She was an extraordinary champion of justice and equal rights, and will be remembered as one of the great justices in modern American history."

"Wow. We're speechless," tweeted the environmental advocacy group 350.org. "RIP Justice Ruth Bader Ginsburg, an advocate for equality and reason. A feminist and an icon who held on in the name of justice."

Senate Majority Leader Mitch McConnell (R-Ky.) vowed Friday night that "President Trump's nominee will receive a vote on the floor of the United States Senate." Though expected, the GOP position was met with intense opposition.

In a statement that recognized RBG as "a stalwart defender of our democracy and the rule of law," noting that she "was a champion for gender equality, racial justice, LGBTQ+ rights, voting rights, commonsense campaign finance laws, fair redistricting, and more," Common Cause president Karen Hobert Flynn, also addressed the issue of her replacement:

"The Advice and Consent clause was intended by the Framers of the Constitution to be a serious and deliberative process, not one that is rushed, or timed to achieve maximum political leverage weeks before the election. Common Cause calls on every U.S. senator of conscience to do everything in their power to ensure a thorough, careful, and transparent vetting process. A rushed confirmation before the election or during the lame duck Senate session will only increase cynicism among the American people and further undermine the legitimacy of the Supreme Court."

Vanita Gupta, president and CEO of the Leadership Conference on Civil and Human Rights, concurred that the Senate should hold off on a vote, charging that "it would be an insult to her legacy for this president to select a justice he promises will assail our rights and undermine, upend, and unravel our democratic norms for generations."

Ginsburg's "wisdom served to remind us that the Supreme Court belonged to all of us, not to any party or politician," Gupta said. "Her rulings were the embodiment of those words etched on the building in which she served—equal justice under law. Freedom has lost a stalwart champion."

"Ruth Bader Ginsburg, deliberate and dedicated in her craft, created a more just world," declared Rep. Ayanna Pressley (D-Mass.). "5'1" in stature, she stood as a giant for justice and equality. In her name we press on. We must turn our collective grief into action. Do not let up for a moment. Our democracy is at stake."

Senate Minority Leader Chuck Schumer (D-N.Y.) made his position clear Friday, saying: "The American people should have a voice in the selection of their next Supreme Court justice. Therefore, this vacancy should not be filled until we have a new president."

Shaunna Thomas, co-founder and executive director of the women's group UltraViolet, joined the chorus of advocates pressuring the Senate not replace Ginsburg until a new president is sworn in. Praising the late justice as "an icon, a pioneer, a hero, and a legend," Thomas said that "RBG did her part, fighting for our rights until the very end. Now, it's on us to continue the work to protect our rights, lives, health, and freedoms. We honor RBG by digging into the good trouble and fight she devoted her life to and ensuring that her last wishes are honored."

Responding to her final words, Rep. Alexandria Ocasio-Cortez (D-N.Y.) said: "We have lost a giant in the history of our nation with the passing of Ruth Bader Ginsburg. It is heartbreaking that in her final moments she was, as are many others, preoccupied with what would happen after her passing. I want to make one thing clear: we can, and must, fight."

"The consequences of RBG's passing are many," said Democratic New York state Sen. Jessica Ramos. "May her memory be a blessing and give us the fortitude we'll need to do the work that lies ahead to save our country."

"Our nation has lost a justice of historic stature," said Chief Justice John Roberts. "We at the Supreme Court have lost a cherished colleague. Today we mourn but with confidence that future generations will remember Ruth Bader Ginsburg as we knew her, a tired and resolute champion of justice."

The liberal justice's life was captured in the 2018 documentary RBG as well as On the Basis of Sex, a biographical film released that same year starring Felicity Jones as a young Ginsburg. As the New York Times summarized in her obituary Friday:

"Justice Ginsburg was born in Brooklyn in 1933, graduated from Cornell in 1954, and began law school at Harvard. After moving to New York with her husband, she transferred to Columbia, where she earned her law degree.

She taught at Rutgers and Columbia and was a leading courtroom advocate of women's rights before joining the court. As the director of the Women's Rights Project of the American Civil Liberties Union in the 1970s, she brought a series of cases before the court that helped establish constitutional protections against sex discrimination."

Rep. Debbie Dingell (D-Mich.) said Friday that she was "mourning the loss of not only a fair and strong jurist, but a woman who opened doors wider for everyone. Ruth Bader Ginsburg fought for justice and equality—deeply American values. RBG not only blazed her own trail in the legal field, but she inspired generations."

Ginsburg "forever changed our country with her tireless advocacy for women's rights and gender equality," declared the group Indivisible. "The Supreme Court will never be the same."

RBG's husband, attorney Marty Ginsurg, died in 2010. "The next day, his wife, the justice, was on the bench, reading an important opinion she had authored for the court," NPR noted Friday. "She was there, she said, because 'Marty would have wanted it.'"

The justice is survived by their two children, Jane Carol Ginsburg and James Steven Ginsburg, as well as four grandchildren. According to the Supreme Court statement, a private interment service will be held at Arlington National Cemetery.

What an extraordinary woman! We have to honor her legacy and refuse to seat a new justice till after the next president is in office, just the same way Republicans insisted that we needed to wait for the new President to install a justice in 2016.