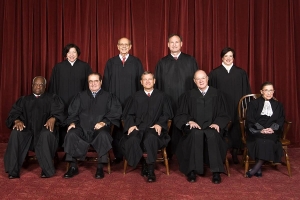 By a 5-4 vote, the justices extended rights to family-held corporations formerly reserved only for individuals, churches and religious nonprofits.  The Court’s majority struck down a key provision of Obamacare, ruling that small, family-held corporations do not have to provide their employees with coverage for forms of birth control that conflict with the owners’ religious beliefs.

The decision means that workers lose the right to insurance coverage for certain forms of birth control such as IUDs, if they work for a family-owned company that objects on religious grounds. It also means that rape victims at such companies would not be able to buy the morning-after pill unless they can afford to pay for it themselves.

Reverend Barry Lynn, executive director of Americans United for Separation of Church and State, called the decision a “dangerous precedent.”

But Archbishop Joseph Kurtz, leader of the U.S. Conference of Catholic Bishops, hailed the ruling as a “great day for religious freedom for family businesses.”

All five justices who voted in the majority had two things in common:  They are all men, and they are all Catholic.

The four justices who voted against the ruling included all three of the high courts women, as well as Justice Stephen Breyer.

Justice Samuel Alito, in the majority opinion, claims that the Obama administration’s healthcare rules in effect told plaintiffs that their religious views were “flawed.”

But Justice Ruth Bader Ginsburg, in a blistering dissent, says the case is not about the plausibility of a religious claim.   Instead, she writes, it is about “whether accommodating that claim risks depriving others of rights accorded them under the laws of the United States.”

California’s Attorney General, Kamala Harris, issued a statement along with 13 other state attorney generals criticizing the decision. She states that the decision “opens a perilous loophole that may enable private, for-profit companies to challenge other common-sense laws—including those that protect against discrimination—based on the religious beliefs of their shareholders.”

Just how far could the ruling extend?  There are religions that don’t believe in blood transfusions or surgeries.  Could such employers refuse to provide coverage for these life-saving procedures?  If a company is owned by a devote Muslim or Orthodox Jew who believes pork is unclean, could they deny a heart patient coverage for implanting a heart valve from a pig?  Could other laws besides healthcare that currently protect workers be at risk, too, if an employer claims a religious exemption?

The ruling did restrict religious exemptions to family-run businesses (where five or fewer people control 50 percent or more of the company).  But that leaves a lot of corporations that now can claim religious freedoms for the first time ever in our nation’s history.  In the past, religious exemptions to laws were allowed only for individual people, churches, and religious nonprofits such as church-run schools.

Locally, some elected officials are speaking out.  Democratic Congressman Scott Peters calls the decision “outrageous given the large percentage of women who use birth control pills to treat serious ailments from endometriosis to post-chemotherapy hormone replacement.” He adds that it is in “everyone’s interest for women to have access to affordable, safe preventative care.”

Speaker of the House Toni Atkins, a San Diego Democrat and top woman leader in the state Legislature, said the Supreme Court “sacrificed justice and freedom” by  ruling that “private business owners could impose their religious beliefs on their employees and deny women their constitutionally recognized right to comprehensive reproductive healthcare.”  She believes the decision goes against Americans’ belief in the right of everyone to be treated fairly and equally in the workplace.”

San Diego’s Republican leaders have thus far been silent publicly on the Hobby Lobby ruling. But at the national level, prominent republicans have lined up in support of the decision. The top Republican in Congress, House Speaker John Boehner, hailed the high court’s ruling as a win for “religious freedom”, a  a victory against “big government” and what he views as a crossing of Constitutional lines by the administration.

The decision casts a spotlight on the conservative makeup of the court.  The ruling comes on the heels of another recent case that gave broader rights to protesters outside abortion clinics.

The court’s liberal justice are aging, thus the next President is expected to make one or more key appointments that will tip the balance of power in the nation’s highest court.

If Republicans win the White House in the next election and a new president appoints just one more conservative justice, the landmark Roe vs. Wade decision would likely be overturned, making abortions illegal.  Roe vs. Wade gave women the right to abortion in the third trimester for any reason, in the second trimester if a physician approves, such as where amniocentesis shows a serious birth defect, and in the third trimester only in dire circumstances such as when the mother’s life is at risk.

Democrats say the decision reflects a “war on women” waged by Republican lawmakers who have introduced bills in states across the nation and in Congress that would drastically restrict rights that women’s groups fought hard to win.  For example, Congressman Duncan Hunter, who represents San Diego and much of East County, introduced a bill shortly after his election that would have outlawed all abortions with no exceptions – not even for women whose lives were in danger, nor for rape victims or children who became pregnant through incest.

The balance of power in the Senate could also determine who will win appointment to the Supreme Court when future openings occur, since the Senate must confirm whoever the President appoints.

With five Catholic male justices making this ruling that impacts women workers of all faiths, many Americans are asking whether greater diversity of religious views is in order.  America has people practicing many religions, yet the court’s majority are from a single church—and their recent decisions have fallen in line with the Catholic Church’s point of view.

Besides Christianity, the Jewish faith is the only other religion currently reflected among the high court’s justices.  Might this decision have been different if the court had members who were Buddhist, Hindu, Muslim, Atheist, Agnostic, or who belonged to progressive Christian churches?

The current court justices, interestingly, have not been even handed in doling out protections based on religious freedoms.   For example,  Justice Scalia issued a decision in the early 1990s that denied Native Americans’  freedom of religon to use peyote, a plant used for centuries in their ceremonies.

One fact emerges clearly from the Hobby Lobby decision: the case has galvanized believers on both sides of this controversial issue to rally their political forces in hopes of claiming political victories in the 2016  Senate and Presidential races – elections that will likely determine the balance of power in the Supreme Court and have an impact lasting for long into the future.

Reporting for East County Magazine on KNSJ, this is Miriam Raftery.