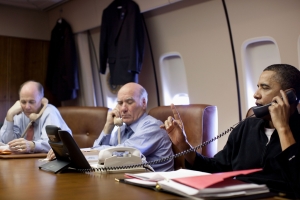 Allied coalition forces led by the U.S. have crippled Libyan air power, though Libyan ground forces continue to wage attacks on rebel forces in several cities amid a civil war.

“We have made significant progress,” U.S. Secretary of State Hillary Clinton told media today. “A massacre in Benghazi was prevented. Gadhafi’s air forces and air defenses have been rendered largely ineffective, and the coalition is in control of the skies above Libya.”

President Obama, in a press conference Tuesday, said the coalition’s actions have “already saved lives. In Benghazi, a city of 700,000 people, you had the prospect of Gadhafi’s forces carrying out his orders to show no mercy. That could have resulted in catastrophe,” he added, noting that Libyan forces have pulled back following attacks by the coalition.

A CNN poll published March 22 found that 70% of the American people said they support the no-fly zone in Libya. But only 28% said they would support use of U.S. ground troops, puttling public opinion squarely behind the President's announced intentions.

Obama has reiterated that under no circumstances would the U.S. commit ground troops to Libya, leaving the question open as to whether NATO forces or other coalition members will be willing to commit ground troops if aerial attacks alone do not succeed in halting slaughter of rebel forces. The President and military officials have indicated that total U.S. military involvement in Libya is expected to be measured in weeks, not years.

The President is facing tough questions from both sides of the aisle in Congress, including a letter from Republican House Speaker John Boehmer asking about costs and criticisms from Democratic Congressman Dennis Kucinich, a long-time peace advocate, on the left. Since Congress is adjourned until next week, however, members have thus far not been pressed to vote on the military action.

Although the U.S. has officially stated that ouster of Libyan leader Col Muammar Gadhafi is not the goal of the attacks, but merely to halt civilian massacres, U.S. officials are now openly calling on Libyan military leaders to stop following Gadhafi's orders. Moreover, the New York Times reports today, France has gone even further, recognizing Libyan rebels as the country's legitimate representatives.

The U.S. has denied claims by Gadhafi that 33 civilians were killed in the air bombings, with one U.S. official insisting that the only casualties were those caused by Gadhafi. Photos on Libyan TV purporting to show civilian casualties could not be verified by international media who were denied access.

The U.S. has lost one fighter plane that crashed due to mechanical failure. The pilot and co-pilot are both safe, with one reportedly aided by rebel forces after bailing out.

The President conceded that the U.S. can’t intervene to “solve every problem in the world,” but reiterated that intervention in this case was appropriate. Unlike Iraq, where U.S. military attacks were widely viewed as unwarranted aggression, in the case of Libya “not only the United Nations but also the Arab League and also other countries in the Gulf” support U.S. and coalition intervention “ to make sure that a disaster doesn’t happen on our watch as has happened in the past when the international community stood idly by,” Obama said.

He added that besides a humanitarian interest, the U.S. has a direct and practical interest in assuring that changes sweeping through the Middle East occur peacefully without “chao”; the latter situation is more apt to lead to instability in the region and allow terrorists more opportunity to gain ground, he has suggested.

“When we can have some impact on that with a relatively modest contribution as part of a broader international effort,” the President concluded, “then I absolutely believe that the costs are outweighed by the benefits and that is what drove my decision.”

This is exactly what the US needs to do. They have a bad enough image of war mongering as it is, hand over to a proper international organisation and do not send in ground troops. This will calm peoples fears about the possible invasion of another country.