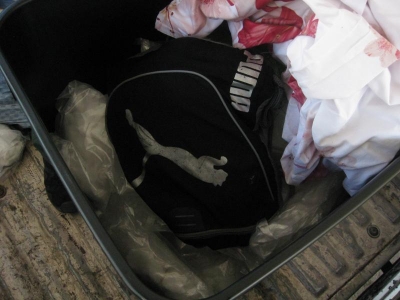 May 13, 2020 (Pine Valley) -  Border Patrol agents at the Interstate 8 checkpoint arrested a woman Saturday morning with more than 103 pounds of crystal methamphetamine in the bed of her truck.

On May 9 at approximately 9:15 a.m., a woman driving a gold 1999 Ford F-250 approached the I-8 Border Patrol checkpoint.  Agents questioned the driver and referred her to secondary for further investigation.  Once in secondary, a K9 detection team preformed a sniff of the truck which resulted in an alert.

With a further search, agents discovered 74 plastic-wrapped packages of crystal methamphetamine concealed inside a duffel bag and a trash can in the bed of the pick-up.  The packages weighed 103.5 pounds and have an estimated street value of $232,875.
The woman, a 36-year-old United States citizen and the narcotics were turned over to the Drug Enforcement Administration for further investigation.  The pick-up was seized by the Border Patrol.
San Diego Sector has seized more than 2,245 pounds of methamphetamine since October 1, 2019.  This accounts for nearly 26% of meth seized by Border Patrol along the southwest border.
To prevent the illicit smuggling of humans, drugs, and other contraband, the U.S. Border Patrol maintains a high level of vigilance on corridors of egress away from our Nation’s borders.  To report suspicious activity to the U.S. Border Patrol, contact San Diego Sector at (619) 498-9900.

The way meth affects people is horrible. Every possible action should be taken to prevent it's production especially against nations like China who make the precursors.

Legalise weed and cocaine, remove the profit from the drug cartels.