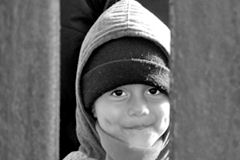 2 out of 3 Californians support work permits for children who were brought to U.S. illegally and have since completed high school or military service; Majority also support content of Arizona’s S.B. 1070.

October 29, 2012 — California voters support tough law enforcement policies on illegal immigration in large numbers, but more than two-thirds of Californians are willing to carve out exceptions for children who arrived in the United States without documentation, according to results of the largest statewide poll of registered voters.

In the latest USC Dornsife/Los Angeles Times Poll, conducted Oct. 15-21, California voters strongly support President Obama’s policy on the so-called DREAMers. The policy allows illegal immigrants who came to the U.S. as children to receive work permits if they have completed a certain amount of education or military service. About 69 percent of voters favor the policy, and 24 percent oppose it.

Californians also support a new law signed by Governor Jerry Brown that would allow certain illegal immigrants who arrived in the U.S. as children to receive driver’s licenses if they are in school or have completed high school, or have served honorably in the military. Sixty-one percent of voters support the new California law and 33 percent oppose it.

However, while Californians are sympathetic to people who arrived in the United States illegally as children, voters also support strong law enforcement measures on illegal immigration, including a heightened border presence. Sixty percent of voters support stronger enforcement of the border with National Guard troops, and 29 percent oppose it.

"Californians seem to have developed a much more considered and nuanced set of opinions on the immigration issue than the loudest voices on both sides of the debate would have us believe," said Dan Schnur, director of the USC Dornsife/Los Angeles Times Poll and director of the Unruh Institute of Politics at USC. “On one hand, state voters want to support and provide opportunities for young people who were brought to this country as children, but they also strongly support strict law and border enforcement measures for those who knowingly break the law."

Schnur also pointed to the responses that Californians offered when asked whether those who were in the country without documentation should be eligible for education and non-emergency health care. In 1994, state voters passed Proposition 187 with almost 60 percent support, but today, Californians are almost evenly split on the question.

Forty-six percent of voters favor denying illegal immigrants taxpayer-funded social services, and 44 percent oppose it. Older voters age 50 and over were evenly divided, with 47 percent supporting the policy, and 45 percent opposed to it. Younger voters were also divided, 47-44.

"Not only has California have a much larger Latino population than ever before, but attitudes among white voters have changed markedly on this question since 1994," Schnur said. "As more Californians live in multi-ethnic communities and interact with those of different backgrounds, their life experiences have had a profound impact on their feelings on this issue."

A majority of California voters also supported Gov. Brown’s veto in September of the so-called TRUST Act, which barred law enforcement officers from detaining illegal immigrants for deportation if they were not charged with a serious or violent crime. The bill was backed by such prominent politicians as Los Angeles mayor Antonio Villaraigosa and House Minority Leader Nancy Pelosi.

Voters were read a pair of statements outlining positions for and against the bill. A majority of voters – 56 percent – agreed with the statement that “local law enforcement should be allowed to work with federal authorities to detain all illegal immigrants if they so choose,” including 41 percent who agreed with the position “strongly.”

In contrast, 33 percent of voters agreed with the statement that “the state should prohibit local law enforcement from cooperating with federal authorities to detain illegal immigrants who are not charged with a serious or violent felony,” including 22 percent who agreed with this statement “strongly.”

California voters also favored the content of S.B. 1070, Arizona’s controversial immigration law, which requires police to verify the legal status of individuals they have already detained if there is “reasonable suspicion” that the person might be in the country illegally. When the law was described — without mention of “Arizona” or “S.B. 1070” — 53 percent of California voters support the law, and 39 percent oppose it.

By age, older voters were much more likely to support S.B. 1070 than younger voters. Fifty-eight percent of California voters 50 and over support the law, and 33 percent oppose it. Among voters 18-49, the law is supported by 47 percent of voters and opposed by 46 percent.