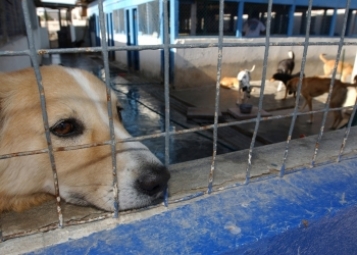 February 11, 2017 (Washington D.C.) – Information on Animal Welfare Act violations has been taken down off the Department of Agriculture’s website under the Trump administration.  The action has outraged animal rights activists and consumers, who rely on the information to check complaints of animal abuse including puppy mills, horse racing, zoos, circuses, laboratories and other facilities.

“Countless cases of animal cruelty have been removed, and the actions and identities of abusive companies have been hidden. Citizens in our country deserve more transparency and accountability, not less,” says Gene Baur of Farm Sanctuary, Newsweek reports.

But now the Humane Society of the U.S. has sent a letter to the U.S. Department of Justice reminding the government that under a 2009 legal settlement with the Humane Society, USDA had agreed to make some of the records public that have since been removed off its public database.  But the suit only applies to records from 2009 to 2013.

The Humane Society’s lawyers have threatened to exercise their rights under the settlement to ask a judge to reopen the legal case if the matter is not resolved within 30 days. The suit was brought in 2005 to force release of records on animals used for testing in biomedical research labs.

The animal protection group also contends that removing the reports of animal abuse violates the federal Freedom of Information Act, since FOIA requires agencies to make information available for public inspection by electronic means. That could apply to all of the scrubbed records, arguably.

According to the USDA, the database was removed due to a need to maintain “privacy rights of individual.” The agency claims the records were removed following a year-long review. It claims people can still request documents through FOIA, but that’s a lengthy process that can take months or even years.

Animal researchers also object to removal of the data. “This change…makes it more time consuming, although not impossible, for organizations like FBR to analyze trends in animal use in research,” Matthew Bily, president of the Foundation for Biomedical Research, said in a prepared statement. The group supports use of animals for research purposes.

The USDA transition team is reportedly being led by Brian Klippenstein, who heads up Protect the Harvest. On its website, the organization states that its goals include information “consumers, businesses and decision’ makers about the threats posed by animal rights groups and anti-farming extremists,” raising the question of whether there was a political motivation to hide data from the public.

Activist groups have urged consumers to send photos of their pets to their Congressional and Senate representatives asking that the USDA restore the information on animal welfare that was removed, tweeting images with the hashtag #NoUSDAblackout.  (Read more.)  Many have flooded Congressional offices with photos of dogs, cats and other companion animals, along with stories about how their pets were rescued from puppy mills, hoarders or other abusive situations.  The public is asking that the USDA not put privacy over the welfare of animals.

This was done for a very good reason: to protect animal owners from being viciously harassed by animal rights organizations. Of course HSUS and the other animal rights groups are angry – they no longer have a free, handy-dandy list of pet and farm animal breeders to harass. And their harassment frequently gets very vicious indeed. Animal rights organizations are not interested in the welfare of animals but in forcing the world to adopt a vegan lifestyle by every means available, including harassing anyone who owns or breeds pets or farm animals or trains or uses them in any way (such as circuses and zoos). These groups constantly bombard our news outlets with allegations of animal cruelty – very few of which are true. The public APHIS list turned everyone with an APHIS permit into sitting ducks for unfair and nasty treatment, whether the permit owners had been found guilty of violations or not. It’s a good thing the list is no longer public.
This article is inaccurate and misleading. The APHIS changes were made well before the November election, and negative references to Trump are false, he has had absolutely nothing to do with the changes. Neither Farm Sanctuary nor HSUS are Animal WELFARE organizations, they are both Animal RIGHTS organizations, big difference. The APHIS changes were made in response to those Animal Rights activists using private citizens' information to attack and harass them. The information on violations is still available, anyone who needs it for legitimate purposes can simply file a FOIA request to get it.There is way too much false "news" being spread these days, and this article is a nice example. Please verify your information before publishing it. Thank You.

CNN reported on this:  http://www.cnn.com/2017/02/04/us/usda-animal-abuse-database/   They even viewed documents people had obtained off the site before it was taken down, showing privacy information redacted.

It certainly is possible to post information on complaints and findings of abuse at facilities while redacting out (blacking out) personal information such as owners' addresses to prevent harassment.

It is NOT okay to require people to do FOIA requests to get info such as this. FOIA requests, which I've done many times, can take months or longer.  Sometimes there are hefty fees.  The public should have this info online.