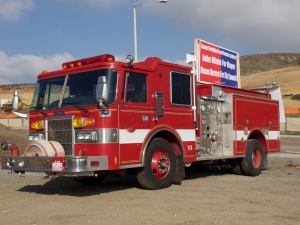 He asked who owns the fire truck and suggests the electioneering gives the impression that the vehicle is a city vehicle. He also asked whether the firefighters’ union disclosed any costs on their FPPC filing and called on the city to establish an “ethical code of behavior” for city employees in regard to electioneering.

Chris Thompson, president of the Santee Firefighter’s Association, responded to our inquiry.  He says the vehicle is owned by  a member of the association, not by the city or the union. He adds that money for fuel,  signs or other associated costs are listed in the union’s FPPC filings under schedule E and  that use of the vehicle is listed as a nonmonetary contribution under schedule C.

“We do not believe our actions to be deceptive or unethical,” Thompson adds, noting that the union has a political action committee (PAC) similar to other firefighting unions.

Collinsworth has faulted the association’s involvement in Santee politics, noting that 82% of members live outside of Santee. But Thompson counters, ”Our firefighters spend  a minimum of 30% of our time, 120 days a year at the fire stations in Santee. We absolutely have a vested interest in who gets elected,  as local politicians control our hours, wages,  benefits and working conditions, as well as our ability to provide adequate safety to the citizens of  Santee through policy decisions.” 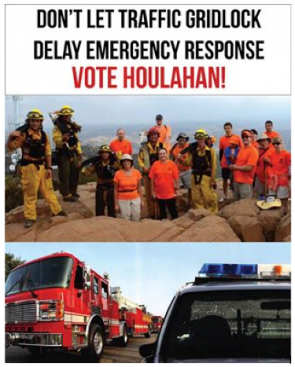 Collinsworth, an environmentalist who heads up Preserve Wild Santee,  is backing Stephen Houlahan,  a candidate who led efforts to block the Quail Brush power plant near Mission Trails Regional Park and who has taken no money from  developers, in contrast to Herron,  who received significant funds from  developers.

But Thompson notes irony in Collinsworth’s criticism of the firefighters’ union, noting that Houlahan’s campaign page on Facebook has a post from Preserve Wild Santee that shows a photo which reads “Don’t let traffic gridlock delay emergency response.  Vote Houlahan!”  The image includes firefighters (not from Santee) along with an unmarked fire engine and police car.

“This picture sure looks like they want people to believe the Santee Firefighter’s Association and Deputy Sheriffs Association supports them, Thompson observes.

Transparency? Like using Fire stations, fire engine, fire department logos, firefighters in uniform on a Political facebook page used by the largest Union in the State, you call that transparent? Transparency, like misinforming the readers that firefighters will lose jobs, CAL HR Assistant Director stated that "no firefighters will lose their jobs". That is sending the wrong message! Saying that same face book page and political campain represents "Local Firefighters", with no permission from the Department to use images for political purposes. The same "Local Firefighters", that are here in your community because of a contract with the San Miguel Fire District. The same contract that will be cancelled early because of raising costs, and "No Local Control" over the firefighters that are hired, and work in San Miguel Fire District. For true transparency, please come to a San Miguel Fire District Board meeting and find out for yourself. Regular Meetings of the Board of Directors are held on the 2nd Wednesday of each month at 5:30pm at District Headquarters at 2850 Via Orange Way, Spring Valley.
This is nothing new, the former San Miguel Firefighters are doing the same. See the link to our CAL FIRE San Miguel Firefighters of Local 2881 Facebook Page, it clearly shows the misrepresentation. As the Deputy District Vice President of CAL FIRE Firefighters Local #2881 I can assure the readers of ECM that we are working hard everyday to ensure that 40 CAL FIRE Firefighters DO NOT lose their jobs or be relocated out of the area based on false data and inaccurate information to benefit a select few. We will continue to ensure transparency. https://www.facebook.com/CAL-FIRE-San-Miguel-Firefighters-of-Local-2881-1599182290364788/