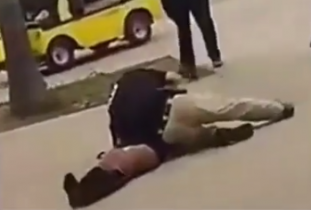 Aerimaquie Meeka, whose sister attends Helix, calls the action “ brutality. “ Meeka, a former Miss California USA according to her Facebook bio, posted, “I will be completely shutting down my sisters school Helix High on Monday!” adding that a student walkout and press conference will take place at 8 a.m.  “We are demanding this officer who slammed a young lady on the concrete while handcuffed be removed from the school and not allowed to work at any other school for the rest of his career.”

The video on Instagram and Facebook does not show what happened before the girl was knocked to the ground, though Meeka claims it happened more than once.

The student, who appears to be African-American in the video, had a dreadlocks hairstyle and wore a short skirt when forced to the ground by the officer.

La Mesa Police Department issued a statement about the incident.  It states that the student was arrested by a La Mesa Police school resource officer “for refusing to obey a lawful order to leave school grounds and resisting arrest.”

According to LMPC, Helix staff asked the officer to remove the student, who was on suspended status and did not comply with staff directions to leave campus. The officer asked the student to leave voluntarily and when she twice refused, a violation of the penal code, the officer arrested her and placed her in handcuffs, then began walking her toward the school office.

LMPD's release states, “As they were walking, the student became non-compliant on two separate occasions and made an attempt to free herself by pulling away from the officer.  To prevent the student from escaping, the officer forced the student to the ground,” the LMPD release states. “After the student agreed to quit resisting and attempting to escape, the officer assisted her up and walked her to his patrol vehicle. She was transported to the La Mesa Police Department.”

The student suffered minor abrasions and was evaluated by paramedics at LMPD but was deemed not to requirement treatment; the officer was not injured, according to LMPD. The department’s statement concludes, “La Mesa Police Department staff is aware of and in possession of a video, which depicts the student being taken to the ground.  As is protocol with all incidents involving use of force, the La Mesa Police Department will be conducting a detailed review of the force used and of the entire incident.  Helix High School officials are also fully aware of the facts surrounding the incident.”

LaShelle Johnson wrote, “Campus police officers should NOT be able to do this to any child ever,” adding, “They are supposed to protect our children NOT HURT or terrorize them.”

To be body slammed like that onto concrete? How was that appropriate given she was already rendered controllable by handcuffs? What threat was she posing to the Officer or bystanders that warranted that kind of action? A jury will be making a very sizable award out of this and guess where that money comes from!
Stupidity prevailed.

Police are trained to use force. They use guns, batons, body armor, take down and choke people. Schools should first call the parents to pick up their kids so the family can safely take the student home or to a physician.

Aeiramique Blake states on FOX news: (see link) http://fox5sandiego/2018/01/22/protest-planned-at-helix-high-after-video-shows-handcuffed-student-thrown-to-ground " the student was allowed on campus while assigned to in-school suspension but the 17 year old had a conflict with an instructor who accused her of being on drugs. The instructor searched her backpack and no drugs were found, but the teen had pepper spray. The student said she carried it for protection because she rides the trolley to school from southeast San Diego, but the teacher told her she'd have to leave campus because she brought a weapon. When the girl refused to leave, the instructor called police. So begins the episode of events. Possession of pepper spray by a minor child is illegal in California.

I'd want her to have some form of self protection.  Having been attacked once myself on a public street, I am very concerned about the state's lack of consideration for teen girls' safety. I think they should be able to carry pepper spray and it should only be a crime if they misuse it.

I don't know what happened before the video begins, so not sure whether there was any more to this than what we've seen.  My point is simply that the state law seems unreasonable to me; pepper spray isn't a gun, it's not lethal and doesn't cause long term harm, but could save a young woman's life if she was attacked as I once was; if not for a bystander hearing my screams after a man grabbed me and tried to drag me away, I shudder to think what would have happened.  After that I did carry pepper spray and a shriek alarm while working in a city with a high rate of violent crimes.

first off, yes she shouldn't have been on campus, she was ask to leave, didn't leave fast enough. Cop handcuffed her and proceed to walk her out. Now was her hands behind her back and him holding on to cuffs or as i think as most cops do this, cuffed behind the back and lifted her arms up to inflect pain. either way so she pulled away from him her hands were handcuffed behind her back, and she was wearing a short skirt, she wasn't gonna go far, BIG DEAL this cop didnt take her to ground, he body slammed her with extreme force. He should never be allowed to do anything with a minors are included while on duty. Cops wonder why there hated and targeted. surprise he didn't shot her and claim he feared for his life. If that was my kid, I be face life or death. Her little no violent crime, did not warrant what this cop did
Violence is never good at any level and I certainly don't condone it. But - the video does not show what happened before the violent act of body slamming the 17 year old to the ground. I find it interesting and a bit disturbing that the video may have been edited in possible favor of the girl, thus showing the police officer in a bad light. One can assume what may have been going on, but unless he or she were there and can prove what actually went on, then we must remain non judgemental at this time. According to LMPD: The young girl seemed to have been extremely combative, and attempted to pull away from the officer resulting in him doing what he did. Hopefully a body camera will prove what actually went on. Yes the incident may have been a little rough, yet a police officer has a right to control a situation and protect his or her safety. The student should not have been on the campus if she was suspended. This act led to what happened. If she would have just left when asked... A 'walkout' doubtfully will solve the issue of 'police brutality'. Seriously, what is a police officer supposed to do when handling a violent person? Under the age of 18, male or female, any ethnicity - actions cause reactions.I'll remain skeptical for now.
This is crazy, no matter what this 17 yo girl in handcuffs did before this footage was shot, she does not deserve to be slammed to the ground.

And whose fault is that?