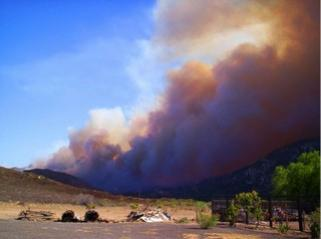 February 9, 2016 (San Diego’s East County) – Last year, 65 percent of the U.S. Forest Service’s $5 billion budget was spent on fighting wildfires, leaving only 35 percent for everything else.

Robert Bonnie, undersecretary for natural resources and the environment at the U.S. Department of Agriculture overseeing the Forest Service, says that situation is “not sustainable.”

Beyond the drought that has plagued western states in recent years, climate change has played a role. Over the last 30 years, the length of fire season has increased by 78 days on average across the west, the Guardian reports.

That raises serious concerns for our region, home to Cleveland National Forest, a region that also has been devastated in 2003 and 2007 by two of the worst firestorms in California history.

The Forest Service has asked for an increase in its budget. However the Republican-controlled Congress recently rejected President Barack Obama’s entire budget, leaving future funding for firefighting as well as the Forest Service’s conservation efforts in jeopardy.