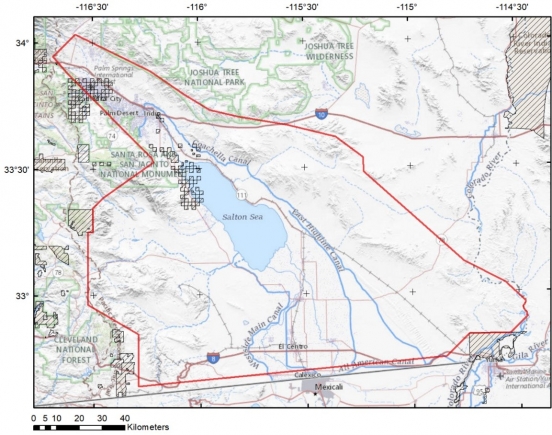 January 14, 2022 (San Diego) – The U.S. Geological Survey (USGS) today announced that residents and visitors may notice a low-flying aircraft over the Imperial Valley, Salton Sea and surrounding areas in southern California starting as early as mid-January 2022 and continuing into Spring 2023.

“The flights will support on-going programs to map and model the local geology.  The results may help identify the potential for undiscovered geothermal and mineral resources, as well as better understand the geology, hydrology, and potential for natural hazards like earthquakes,” says Allie Weill, PhD, acting Public Affairs Specialist for the Western Ecological Research Center at the USGS.

The aircraft will carry instruments that measure the earth’s naturally occurring magnetic field and radiation -- data that will help characterize rock layers at and below the surface. The instrumentation aboard the aircraft is passive, meaning it only receives information. It does not emit any signals and poses no health concerns or risks to humans, pets or wildlife.

“Anyone observing the low-flying plane should not be alarmed when they see it fly over or pass below the horizon. The airplane is operated by experienced pilots from EDCON-PRJ, who are specially trained for low-level flying and are following all laws,” says Weill.

See map above for the areas to be flown.