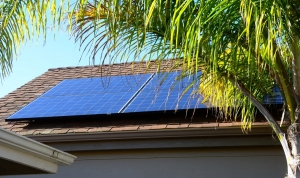 By Dave Rosenfeld, special to CalMatters

As PG&E emerges from their second bankruptcy in 20 years while pushing 11% rate hikes on their customers, it seems they’re looking for a scapegoat, and they have found one: people who put solar on their roof.

Take, for example, PG&E’s recent proposal to end a successful solar energy policy known as “net metering.” Net metering provides schools, small businesses, apartment buildings and households a fair credit for the energy they make from the sun and share with their communities. Because of net metering, cities like San Diego, Bakersfield and San Jose are national leaders in renewable energy. Nearly half of California’s solar adopters are working and middle class.
This is great for the public, but not for PG&E’s profits. The more communities make their own energy, the less they buy from PG&E. The less they buy, the less PG&E profits. This is because making energy locally reduces the need for long-distance poles and wires. This doesn’t mean PG&E will go bankrupt at the hands of all those little solar consumers, but it does mean PG&E may not be able to pay their corporate executives $1.7 billion like they did in 2017.
Recently, California utilities submitted proposals to essentially put an end to net metering and dramatically slow the growth of local solar energy. For example, under the utility proposal, a typical household would pay, on average, an unavoidable fee of $78 per month just to have solar on their roof. This and other provisions would make solar inaccessible for the vast majority of residents in California.
As utilities attempt to put an end to energy choice, electricity rates in California have gone up more than 130% since 2000. Why? A recent report by the California Public Utilities Commission found that companies like PG&E and Southern California Edison are incentivized to make investments that increase costs for energy consumers and inherently deliver more profits to its investors.
Consider: Utilities charged energy consumers more than $20 billion in transmission line projects between 2010 and 2019, and collected nearly $20 billion in profits over the same time period. Energy consumers paid more than $4 billion to cover transmission costs in 2021 alone, up 66% since 2016 for PG&E customers.
Meanwhile, a new utility modeling tool confirmed that increasing our investments in local solar and batteries is the most cost effective way to transition our electricity system off of fossil fuels, and would save all energy consumers nearly $500 billion by 2050. The benefits of local solar and battery storage are already visible here at home. In 2018, California’s energy system operator canceled $2.6 billion in utility spending thanks in part to local solar and efficiency improvements.
Still, Callifornia utilities are planning to spend $15 billion over the next two years on outdated, failing technology. Utilities want to continue overbuilding a broken system and pass those costs to customers for profit.
At a time with increased power outages and wildfires, we can’t afford to double down on our outdated electricity system. Utilities still have an important place at the table, but the era of the expensive, centralized monopoly must end. We need to instead empower the public to have more control over their energy, and help millions more people power the future with resilient, clean and affordable solar energy with batteries to keep the lights on when the sun doesn’t shine. This won’t be possible if California lets the utilities dismantle net metering.

are the way to stop this gouging by these utilities. time to bring this back "san diego gouge and extortion"!
As battery technology advances, it will be possible to check out of this proposed legal thievery just by going off grid. No SDGE service, no $78 a month for the sin of owning your own solar panels. Any legislator who gets behind this garbage needs primaried.