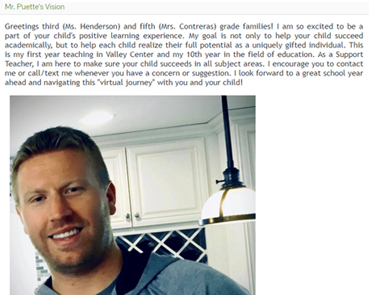 By Miriam Raftery
Image via Valley Center Elementary School website
May 6, 2021 (Valley Center) – Kyle Puette, 37, a third and fifth grade teacher at Valley Center Elementary School, has been arrested on charges of sending harmful matter to seduce minors and communicating with minors to commit a sexual offense.
The alleged criminal offenses offered in Bakersfield, where Puette was formerly employed as a fifth grade teacher at Louse Sandrini Elementary School from 2013 to 2017. Two juvenile teenage victims have been identified thus far, according to the San Diego Sheriff’s Department.
The Sheriff’s department assisted Bakersfield Police and the San Diego Internet Crimes Against Children Task Force in the case.
Puette is alleged to have contacted juveniles via social media and engaged in graphic and inappropriate conversations via chat and video messaging with former students, according to Bakersfield Police Sergeant Robert Pair.
“At this time, there are no known victims in San Diego County,” Sgt. Pair states.
If you believe you are a victim or have any information, call the Bakersfield Police Department at (661) 327-7111, the San Diego Internet Crimes Against Children (SDICAC) Task Force at (858) 715-7100 or San Diego County Crime Stoppers at (888) 580-8477.