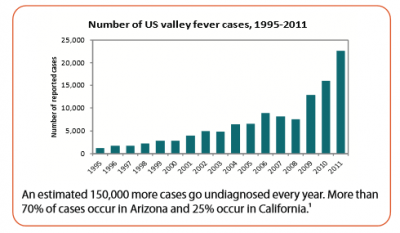 March 29, 2013 (San Diego’s East County) – The Centers for Disease Control yesterday issued a press release warning that cases of Valley Fever (Coccidioidomycosis), a fungal respiratory disease, have risen sharply across the southwest including California.  Cases rose nearly ten-fold from 2,265 in 1998 to over 22,000 in 2011 in southwestern states.

California now accounts for 25% all cases, trailing only Arizona, which has 70% of cases.   The fungus occurs naturally in dry soils of the southwest and is spread through the air when people inhale the spores. Outbreaks have occurred following wildfires and those in occupations exposed to dust are at higher risk, such as construction workers, archaeologists, farm workers and Border Patrol agents. important that people be aware of Valley Fever if they live in or have travelled to the southwest United States.”

Over 40% of people who become ill with Valley Fever require hospitalization and 75% miss work or school.  Recovery can take weeks or months and in some cases, the disease can be fatal.  Average cost of hospitalization is $50,000.

The initial symptoms resemble flu or pneumonia.  In more advanced and severe cases, the fungus travels through the bloodstream and can wind up anywhere in the body including the brain or other organs, in the joints, or in skin lesions.

In 2011, more than twice as many cases of Valley Fever were reported than tuberculosis. Unlike TB, however, Valley Fever cannot be spread person to person.  The number of cases is likely under-reported, since initial symptoms are similar to pneumonia or flu and most often, testing is not done for Valley Fever on patients presenting with those symptoms. The CDC advises medical professionals to consider Valley Fever when treating patients who live in or have visited areas endemic to Valley Fever, including California and other Southwestern states.

The most common drug prescribed, fluconazole, is taken orally. .But it causes severe birth deformities if taken by pregnant women and can cause heart attacks or kidney damage in others.  In more severe cases,  intravaneous drugs can be prescribed but they are costly – thousands of dollars a month—and up to 80% of those taking the most common IV drug prescribed have wound up with kidney damage, some forced to undergo dialysis.

What’s causing the alarming increase in cases?  The CDC suggests that climate changes may be a factor, as well as disruption of soil by construction, along with better testing.

with industrial scale wind energy on solar on previously undisturbed public lands that results in increased blowing sand and dust may be an important source of fungal spores leading to increased exposures.”

ECM has previously documented serious problems with dust at the Ocotillo Express Wind Facility during construction, when Pattern Energy was cited for violations of dust mitigation requirements and the construction zone at times resembled Dust Bowl conditions. (Photo, right)

Harmon added that some Imperial County residents a “very ill with Valley Fever and getting treated in Phoenix. I have also been told that it is bad for jobs to discuss Valley Fever. But it is worse for people’s health to pretend it does not exist.”

Valley Fever cases have been found across San Diego County, including cases from Lakeside to Chula Vista.  Some East County residents have raised concerns over the potential for Valley Fever spores to be released during construction of several massive wind and solar projects proposed here.

The CDC has called for more research into the cause of the increase and how to reduce its effects. A vaccine is theoretically possible, but thus far, funding for Valley Fever vaccine research has been a low federal priority.

Valley Fever can also be contracted by animals, including pets.