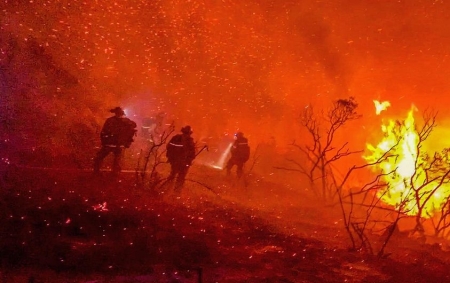 September 6, 2020, 9:30 p.m. (San Diego’s East County) – As firefighters battle the Valley Fire for a second sleepless night, the blaze has burned 9,850 acres, more than doubling since early this morning. It remains only  1% contained, with evacuation that now range south to the border, north past I-8 and Pine Valley, east to Campo, and as far west as portions of Jamul.

Governor Gavin Newsom has declared a state of emergency for San Diego County.  Tonight, the fire is in the area of Lawson Valley and Carveacre, threatening Sunrise Powerlink, the major electricity supplier for most of our region, and Loveland Reservoir, which supplies drinking water to 191,000 residents, Cleveland National Forest reports.

With power out in some areas, residents may be unable to receive evacuation calls.  Some residents have asked that if you receive an evacuation call or flee due to encroaching flames during the night, please honk your horn as you leave to alert as many neighbors as possible. 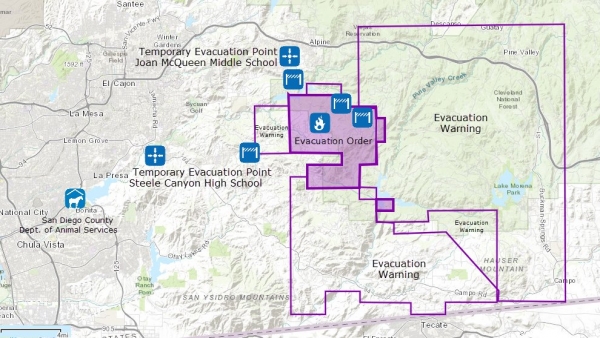 The blaze began yesterday afternoon in the Japatul area.  The fire has destroyed 11 homes and 25 outbuildings.

Currently there are 374 personnel battling the Valley Fire including 56 engines, 5 crews, 71 overhead personnel and 6 bulldozers—but no air tankers or helicopters operating tonight.

The report warns, “Due to lack of night-time moisture recovery, the fire is expected to remain active overnight.” Two injuries or illnesses are also reported; details were not provided.

The fire is causing anguish for many area residents learning of homes lost and others spared. 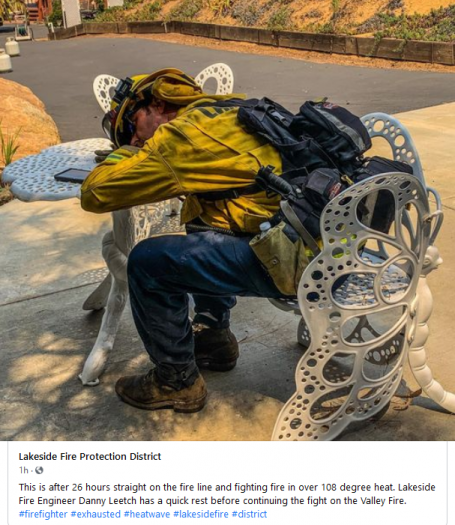 Judy Matteson found that her home on Prairie Lane in the Lawson Valley area survived, but neighboring homes burned down. “The good luck, bad luck part of this, we sold our house last Thursday,” she told ECM, but adds that escrow hasn’t yet closed.  “Don't know how this will affect that process.”

Still she’s more fortunate than neighbors who lost everything, including a woman who has asked for help to find a trailer or RV to live in until she can rebuild.