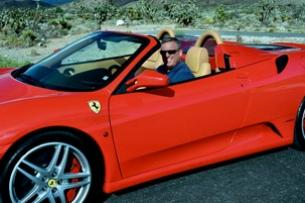 He violated conflict of interest provisions of the Political Reform Act by setting up 13 charter schools in other districts, overseen by Mountain Empire, a financially struggling rural district that got money for its supervision of charters elsewhere.  All the while, Van Zant was lining his own pocket in several cases by having those charters hire his consulting firm, EdHive.

The UT San Diego reports that EdHive charged up to $100,000 for its services. Van Zant and his wife, Ingrid, led a lavish lifestyle that included trips to exotic locations, living along the coast and driving expensive cars, such as a Ferrari and a Porsche.

Now, Van Zant must repay Mountain Empire for stipends he was paid for each charter that the district authorized while he was in charge. That amounts to around $50,000 to $60,000 that the district will be repaid, the San Diego Union-Tribune reports.  He also agreed to forfeit a portion of his retirement money as part of the plea bargain.  His sentencing hearing is set for April 6th.

Van Zant avoided prison, but will also serve 30 days of home confinement, wear an electronic monitor and perform 300 hours of community service.  He also agreed to resign from his most recent job as Superintendent of the Sausalito Marin School District.

East County Magazine was first to investigate Van Zant’s questionable practice of opening up charters in other districts.  At the time, Mountain Empire had been forced by the state to shut down its middle school due to failing test scores, yet was providing oversight of charters including middle schools in other high-performing school districts.  These charters pulled average daily attendance money away from other public schools in those districts for every student that they attracted.

A measure introduced in the state legislature by Senator Fran Pavley would prevent such abuses in the future by banning financially troubled districts from authorizing charters outside their boundaries.