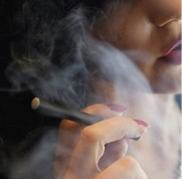 January 27, 2016 (San Diego) –  E-cigarettes have been touted by manufacturers as less dangerous than cigarettes known to cause serious long-term health risks. But now a new study by San Diego researchers reveals that among other hazardous effects of vaping, exposure to e-cigarette vapor dramatically raises the risk of death from “superbugs.”

A quarter (25%) of mice exposed to e-cigarette vapor died when infected with MRSA (methicillin-resistant S. aureus), a bacterial staph infection resistant to antibiotics.  By contrast, all mice that didn’t inhale the vapor survived.  The result held true in tests with seven different types of e-cigarette liquids.

Senior author Laura Crotty, MD, states, “This study shows that e-cigarette vapor is not benign — at high doses it can directly kill lung cells, which is frightening.” Mice also had inflammation throughout their bodies, including in their airways and bloodstreams.

The mice were exposed for just an hour a day, five days a week, over four weeks, NBC News reports.  While human studies have not yet been done, the results are disturbing—adding fuel to the fire of those calling for regulatory reforms to restrict e-cigarettes.

The federally-funded health study was conducted by researchers at the University of San Diego School of Medicine and Veterans Affairs San Diego Healthcare System. It was published January 25th in the Journal of Molecular Medicine.