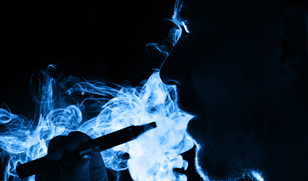 December 23, 2018 (San Diego) -- As the use of e-cigarettes – both for inhalation of nicotine and marijuana – becomes more popular among adolescents and teenagers, according to the 2016 National Youth Tobacco Survey (NYTS), the medical community is raising concerns over their harmful health effects.

Vaping marijuana causes users to experience greater cognitive impairment such as poor coordination and accurately judging distance than smoking it, according to a recent study by the Johns Hopkins Behavioral Pharmacology Research Unit. Marijuana that is vaped at the same dosage as when smoked produces a higher blood THC concentration, possibly because some of the drug is burned off when smoked. Vaping, on the other hand, keeps more of the drug intact, researchers suggested.

The study also found that vaping produced higher instances of adverse effects such as vomiting, anxiety, hallucinations and feelings of paranoia than smoking.

Furthermore, physicians warn that impacts to the respiratory system can also be dangerous. “Even though people may consider smoking marijuana to be more harmful than vaping because the burning of vegetable matter before inhalation releases chemicals, vaping is still harmful to the respiratory system,” Dr. Laura Crotty Alexander with the VA San Diego Healthcare System and associate professor of medicine at the University of California San Diego said. “E-cigarette vapor often contains airway irritants, carcinogens and formaldehyde, which can cause airways to spasm and worsen asthma.”

For youth, exposure to both nicotine and marijuana is especially concerning.  Research has shown that the developing adolescent brain is particularly vulnerable to nicotine addiction. Furthermore, researchers at Children’s Mercy Kansas City recently found that adolescents that used e-cigarettes were at an increased risk of becoming marijuana users. This is alarming because marijuana use has been found to have even greater detrimental effects on adolescent cognitive development over alcohol.

“If youth continue to vape in the long-term, they are more likely to develop damage to the respiratory tract and other organs, leading to adverse health consequences over time,” according to Dr. Crotty Alexander.

Tobacco and marijuana are unlawful for anyone under the age of 21, yet the NYTS found that the use of e-cigarettes among youth has dramatically increased.

Citing teen vaping as an epidemic, the FDA is cracking down on marketing tactics that appeal to youth, such as increasing enforcement and compliance checks, curbing misleading labels and restricting the sale of flavored e-cigarette products to areas of a store inaccessible to teens.

Some cities in San Diego County such as Coronado, Carlsbad, Oceanside, Vista, Poway, El Cajon, La Mesa and National City are also updating their municipal codes to tighten regulations such as banning e-cigarettes in public places, prohibiting the marketing of products to minors, placing restrictions on how close vape shops and marijuana dispensaries can be to schools and prohibiting persons under the age of 21 from entering a tobacco business without a parent or guardian.

“It’s important for all of our San Diego leaders to hear from community members about keeping marijuana away from our youth,” Anne Campbell, a National City resident, said. “Getting involved in the civic process will benefit the health and safety of everybody.”