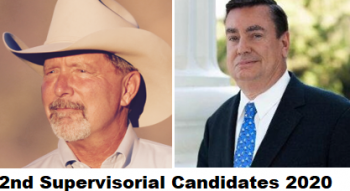 Vaus and Anderson are running to fill the seat being vacated by Dianne Jacob due to term limits.

The San Diego County Board of Supervisors controls a $5 billion budget and makes decision over a wide variety of social service programs, and on issues affecting your health and safety. Four billion, or 80%, of that budget is related to state and federal programs the county is required to administer, and one billion, or 20%, can be used for the Supervisors to establish their priorities.  Most of the $1 billion comes from local property taxes, so it is important for local citizens to know the supervisors’ priorities.

STEVE VAUS is the Mayor of Poway and Chair of the San Diego Association of Governments (SANDAG).  He’s also headed up a committee on Poway’s budget, a community leadership institute, and a substance abuse task force.  He also owns a production company and is a Grammy Award-winning recording artist producing the annual Carols by Candlelight concert to raise money for charities helping children in need. He and his wife, Corrie, have four children and five grandchildren.

“My priorities as East County’s Supervisor will be the same as my priorities as Mayor: keeping us safe from crime and fire, maintaining infrastructure, protecting and expanding open space, encouraging development of new housing, and being accessible,” he says.  Vaus is endorsed by dozens of local officials including Supervisor Dianne Jacob, Cal Fire firefighters, law enforcement organizations, Father Joe Carroll, and a variety of other organizations from across our region.

JOEL ANDERSON  has served as State Senator and State Assemblyman representing East County for more than a decade. He previously served on the Padre Dam Municipal Water District Board. He was named legislator of the year from the Small Business Association, Lakeside Chamber of Commerce and veterans’ groups.  He also had a 100% rating from the California Taxpayers Association.

East County Magazine hosted a web-based candidate forum on September 21 with Poway Mayor Steve Vaus and former State Senator Joel Anderson, who joined ECM editor Miriam Raftery, who moderated the event, to share their views on a variety of some of the most pressing issues affecting East County.

You can view video of the complete candidate forum at:

Highlights and a detailed analysis of the candidates' statements made during the candidate forum, as well as their bios, can be found at: