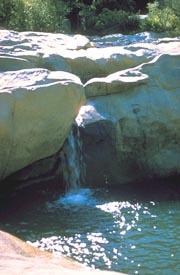 By Miriam Raftery
October 6, 2019 (Rancho Cuyamaca State Park) – A motorcycle crash off State Route 79 near Green Valley Campground charred approximately six acres of brush today.  Around 70 firefighters from multiple agencies battled the #GreenFire by land and air, extinguishing it several hours after it began.
A Tweet from Cal Fire initially reported the fire began shortly before 11 a.m. “in the area of Green Valley Campground in the community of Guatay.” However multiple ECM readers e-mailed to advise that the fire was miles away from Guatay.
According to Captain Isaac Sanchez with Cal Fire, the fire was contained within Cuyamaca Rancho State Park, the San Diego Union Tribune reports.
Crews remain on scene tonight to mop up hot spots. 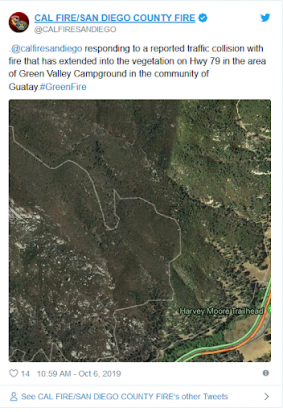 No structures were damaged and no injuries were reported from the fire or the motorcycle accident.